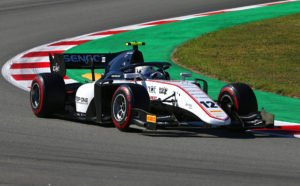 Competing at the 4.655-kilometer long Circuit de Barcelona in Catalunya, Spain, American driver Juan Manuel Correa had a trying weekend in rounds five and six of the FIA Formula 2 Championship. With a mistake in the one and only practice session, track time was limited for the Sauber Junior Team by Charouz driver before he entered qualifying.

“We had a very tough weekend here in Barcelona as a mistake in Free Practice did not allow for very many laps at all,” explained Correa. “We entered qualifying after only just a few push laps and no practice, and that pretty much set the tone for the weekend.”

With the first green taking place on Saturday morning, Correa had hopes to drive forward from his qualifying position. With a mechanical issue on the formation lap and starting the event from pit lane, the young American solidified the third fastest lap of the race, but was unable to complete the full race distance. Beginning the race from pit lane, Correa’s pace matched the drivers at the front of the field as he worked hard to close the gap. Battling forward and into the fourth position, Correa ducked into the pits with an issue to not risk hurting the car any further.

Correa continued, “We had to pit to fix the brake issue and essentially, that was our race. Pretty disappointing day but a silver lining is that the pace was quite good in the end.” 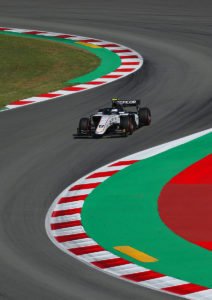 Round six of the FIA Formula 2 Championship was held Sunday morning, just before the Formula One World Championship and in front of a packed house of spectators. Starting from the back half of the grid, advancing forward was difficult in a race where different strategies would never come into play.

“Another very difficult race for us today. I think starting from the back without any difference in strategies from other cars is very difficult to come to the front,” added Correa. “Not much more I could have done there but at least we had the mileage, finished the race and I was able to learn more and gather information on tire degradation. Also, our pace on Saturday was quite good so those are the main positives from the weekend.”

With the next event taking place at the Circuit de Monaco alongside the Formula One World Championship over the May 23-25 weekend, Correa will enter the event weekend sitting ninth in the FIA Formula 2 points championship standings.