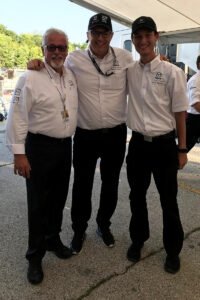 Cedric Burkhardt has been announced and confirmed as the first annual recipient of the Rod Campbell Award and will receive paid apprenticeship style work in the summer of 2021 in several different areas of the motorsports industry.

“I am honored to have been selected as the recipient of the inaugural Rod Campbell Award,” explained Burkhardt. “In my still young career within the motorsports industry, I have seen how important mentorships and relationships are. This award allows me to learn from the very best within the automotive and racing industry and to build relationships with those at the center of the sport. I am truly grateful to Mr. Campbell and his family for leaving behind a legacy that fosters learning and advancement for those just starting out in their careers. I hope to carry on Mr. Campbell’s legacy and to be as altruistic and giving as he was.”

Established to perpetuate a launchpad of opportunity for young professionals looking to begin successful careers in the automotive and motorsports arenas, Cedric, who is the first annual award winner, will receive 4 to 6 weeks of paid apprenticeship style experience in companies run by Rod’s protégés which include Sean Jones, Townsend Bell, Jeff Swoboda, Jason Campbell, David Scheinberg, Steve Madincea, Chris Lencheski and Paul Pfanner.

“Congratulations to Cedric on becoming the first recipient of the Rod Campbell Award,” added Catherine Sandra Campbell. “I know that Rod would have approved of Cedric’s desire to learn and eagerness to work as he seems to have a lot of the qualities of the young people that Rod recruited for employment in Campbell and Company. Best of luck to Cedric this venture!

With experience in 2018 as an Intern at Mazda Motorsports where he worked directly under the watchful eyes of John Doonan and Kyle Kimball, Cedric was able to learn the business and operations side of motorsports. Traveling across the United States learning how Mazda interacted with the grassroots racer, how they ran the Mazda MX-5 Cup program and the then named Mazda Road to Indy, Cedric was also able to take part in and learn how Mazda ran their Dpi program as he gained experience on the ground floor

Having success and expanding his knowledge, Cedric returned to Mazda Motorsports in 2019 working under Mo Murray and Garage Team Mazda. Learning the ins and outs of motorsports marketing, Burkhardt was also part of the ideas phase of the launch of Mazda’s CX30 Crossover

Burkhardt continued, “I currently work for Stetson University where I graduated with a double major in Marketing and Professional Sales with a minor in History. I am now pursuing my MBA. Additionally, I helped in the formation of a partnership between Stetson University and NASCAR in what is known as NASCAR University. This allows Stetson business and sales students to work hand-in-hand with NASCAR sales leaders at the various race events at the Daytona International Speedway.”

With a wealth of knowledge already secured, contacts to grow in the future and now part of the Rod Campbell Award program, Cedric Burkhardt was chosen by a panel made up of automotive and motorsport executives and will now continue to gain paid experience with companies such as 7R Events, Bryan Herta Autosport, Fantastec, Phoenicia Sports & Entertainment, Racer Media & Marketing and Short Shoot TV amongst others in the motorsports industry throughout the summer of 2021.