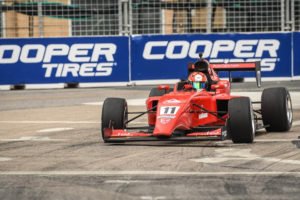 It was a great weekend to a have the best result of the season as Canadian Antonio Serravalle finished fourth in Saturday’s Indy Pro 2000 Championship event on the Streets of Toronto. Coming off one of his better qualifying performances, Serravalle ran as high as third and looked poised to stand on the podium until a late race pass by one of the championship points contenders relegated him to fourth in front of his hometown crowd.

“Saturday was a great day, and it was an important event for me with how many partners, friends and family that we had on site,” explained Serravalle. “Unfortunately, Sunday did not go as planned as a first corner incident caused damage that would force me to retire early in the race. Our team is really starting to gel and the hard work is paying off. The #11 car felt great all weekend. I felt comfortable, probably the most comfortable I have felt all year. Kudos to the guys for a great setup and being on top of their game all weekend long.”

After the one and only practice session on Friday morning, Serravalle steered his Pserra Racing entry to ninth and eighth place qualifying efforts Friday afternoon for Saturday and Sunday’s double race weekend program.

With the first race of the weekend scheduled for 9:25am on Saturday morning, Serravalle gave the Canadian fans something to cheer about. Methodically working his way forward to the third position, the young Canadian ended his day in fourth, his best finish of the season and a career best in the Indy Pro 2000 Championship car.

Back to the track Sunday morning and with grandstands filling up for the NTT IndyCar Series race later that day, Serravalle would look to repeat or improve on Saturday’s performance. Taking the green and the long run into the first corner, Serravalle avoided the first turn melee but would be involved in contact later that lap. Damaging the #11 machine and forcing him to retire from the race, Serravalle was disappointed to not be able to deliver a back-to-back performance in front of his home crowd.

Serravalle added, “It was a shame that our weekend had to end that way, but we will work hard and make sure that we are ready for Mid-Ohio in a few weeks. A huge thank you for all the support from the Canadian crowd this weekend. It is such a great feeling to race in the city only a few miles from where I grew up.”