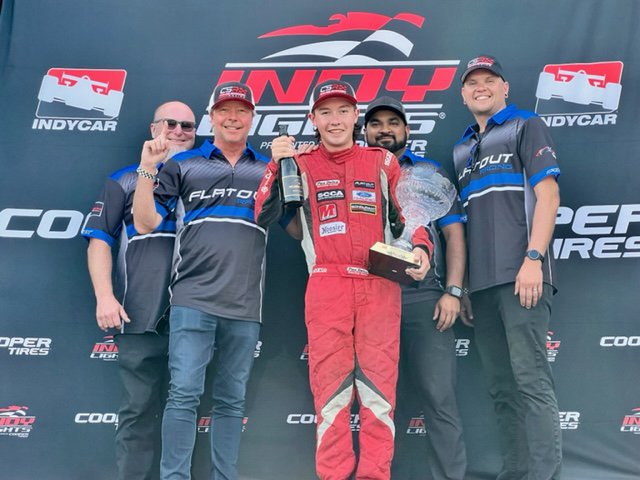 It was a winning weekend for Caleb Shrader at the Weathertech Raceway Laguna Seca. Competing in the Spec Racer Ford program alongside the NTT INDYCAR Series, Shrader dominated the event by earning the pole position and winning both wheel-to-wheel races to sweep the entire weekend of competition. 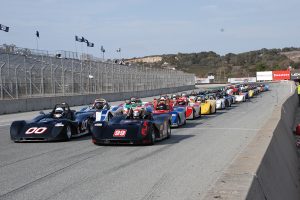 “I am so thankful for how the weekend turned out and hope to take this momentum into the SCCA Runoffs in a few weeks,” explained the 18-year-old. “There are a ton of people to thank for the support to get me where I am today but a huge thank you to my parents and everyone at FLATOUT Racing. Thank you also to SFR SCCA for an amazing event.”

With 39 drivers chosen for the two feature races, Shrader started his event off on the right foot by claiming the elusive pole position. Showing his speed to take top honors, Shrader also showed his race craft when the green flag flew. Dominating the two feature races, Shrader led every lap and scored the fastest race lap in both races to have a clean sweep. Additionally, to the dominant weekend, Shrader retained the Weathertech Raceway Laguna Seca SRF track record at 1:36.285. 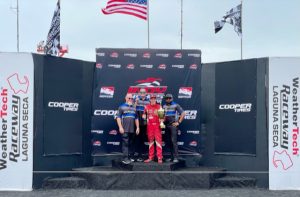 Shrader continued, “I finished second at the June Sprints at Road America in June and really wanted to show that I could climb to the top step of the podium. I think we showed what we had this weekend and hopefully, we can carry that momentum to the SCCA Runoffs at VIR in a few weeks’ time.” 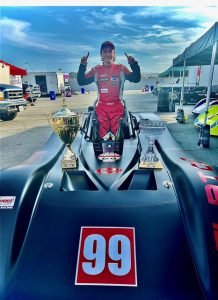 Competing in a dual kart and cars program throughout 2022, Caleb Shrader has three major events left on his calendar, all of which he hopes to be victorious. First up will be a trip to the VIRginia International Raceway (VIR) over the September 24 to October 2 week for the SCCA Runoffs. A marquee event, Shrader circled this one on the calendar when the season schedule was announced. Next up, Shrader will move back to karting where he will do battle in the ROK Cup USA ROK Vegas event and the Superkarts! USA (SKUSA) SuperNationals, both of which will take place on a temporary circuit at the RIO All-Suites Hotel and Casino in Las Vegas, Nevada. As the California ROK Cup Champion in the VLR Senior class, Shrader will compete out of the Rolison Performance Group program in his quest for victory.

To keep up with Caleb Shrader and his race program, please be sure to find him on Facebook, Twitter, and Instagram by searching Caleb Shrader Racing or visit him online at CalebShraderRacing.com.