CALEB GAFRARAR CONTINUES TO SHOW HIS SPEED IN UTAH 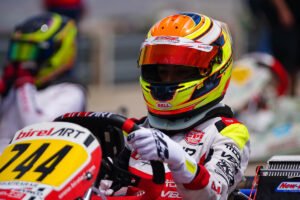 With his first North American junior karting victory under his belt, BirelART North America’s Caleb Gafrarar traveled west to the Utah Motorsports Campus. Taking on rounds three and four of the Superkarts! USA (SKUSA) Pro Tour, Gafrarar entered the SpringNationals weekend with momentum on his side. Ending the weekend with fourth and seventh place finishes, Caleb G will now shift his focus to a busy month of June that will feature three major events in Europe.

After two days of practice, Saturday saw the BirelART North America driver qualify his #744 entry just inside the top-ten as he would roll off for the day’s prefinal from the ninth position. Determined to move forward, Gafrarar did just that gaining four positions in the first wheel-to-wheel action of the day to climb to fifth. The main event proved another gain in positions as Gafrarar moved up to lead several laps before finishing his day in fourth, narrowly missing the podium by a scant three tenths of a second.

“Saturday was a good day,” explained Gafrarar. “I was able to move forward in each session showing that our analysis and debriefs from the session before are allowing me to better my results. Fourth is great but podiums are the goal so we will reset and be back tomorrow.”

Returning to the track Sunday with renewed energy and satisfied with his Saturday result, Gafrarar was able to turn the seventh fastest time in the one and only qualifying session to line up inside row four for the prefinal. With the objective to move forward and set himself up for a chance at the win, Gafrarar fell back and outside the top-ten before fighting back to salvage an 11th place result. Advancing forward four more positions in the main event, the North Carolina resident left Utah with fourth and seventh place finishes. 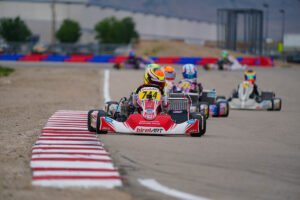 Gafrarar continued, “As a racer you always want to win. I need to be happy as this is my rookie year in junior, and I am competing with drivers that have multiple years of experience. I think we proved that we could compete with the best of them and that the BirelART product line, along with my PSL Karting team are some of the best in the karting market.”

Caleb Gafrarar would like to thank PSL Karting, BirelART North America, BirelART, BN Engines, Bell Helmets, Minus 273, CPI Security, and the Lennox Racing Team for the continued support throughout the 2021 racing season.

Stay tuned to the Caleb G social media pages for news, information, photos, and results from each and every race weekend as well as links to results and live timing.