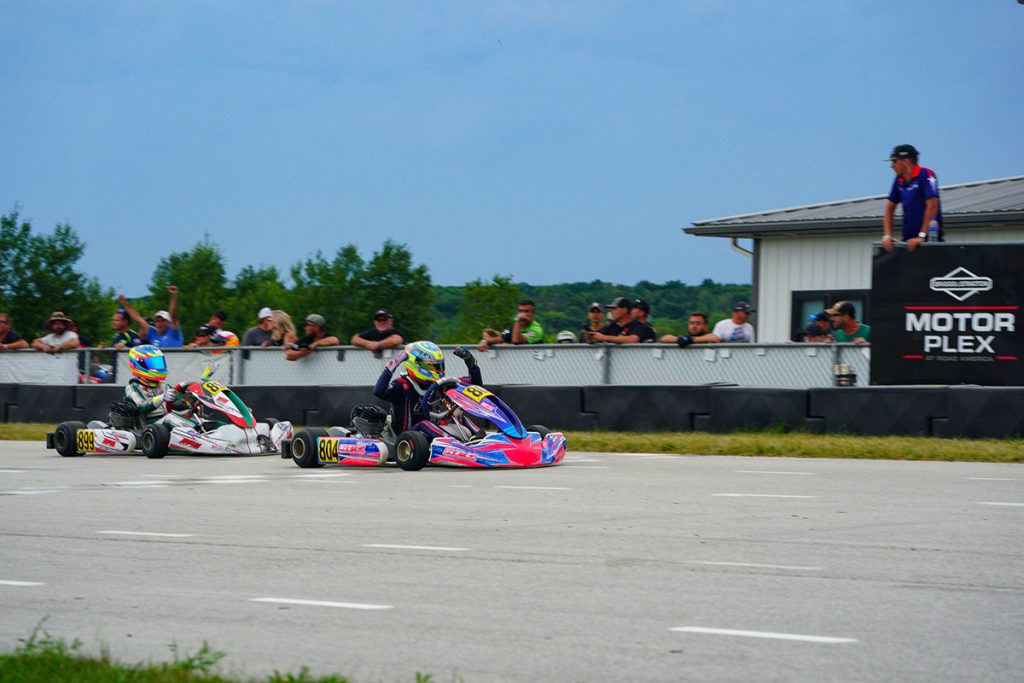 It is beginning to sound like a broken record, but Caleb Gafrarar was a winner again this past weekend. Taking on the United States Pro Kart Series (USPKS) event at the Briggs & Stratton Motorplex at the famed Road America, the Rolison Performance Group (RPG) driver earned his 16th, 17th and 18th main event wins of the season as well as pole positions and prefinal victories to show his strength at the front of the field. 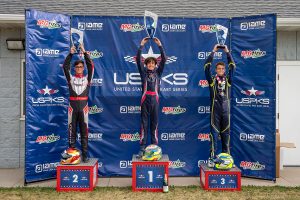 “It was a good weekend for the most part as we once again showed our true speed in both classes,” explained Gafrarar. “We are leaving Road America with a pole, two prefinal wins, two fast lap awards and three main event victories.”

Saturday would prove to be the more difficult day for Gafrarar as qualifying did not bring the results that he is accustomed to. After qualifying third in X30 Pro Junior, Gafrarar was classified in eighth in KA100 Junior and would be forced to try and drive his way forward.

After moving from third to first and scoring the X30 Pro Junior prefinal win and accompanying pole position for the day’s main event, some contact at the start of the final sent the Circle K backed driver into a spin and down the running order. Driving through the field and into the top-ten, the action would happen a second time as Gafrarar once again fell to the back of the running order and was forced to drive his way forward. Showing his never give up attitude and his true speed, the Kosmic driver scored the fastest lap of the race as he earned a solid P9 finish. Looking for redemption in the KA100 Junior class, Gafrarar finished ninth in the prefinal, but was elevated to seventh due to post race penalties in front of him. Starting from the inside of row four for the day’s main event, Gafrarar drove a near perfect race to advance forward and claim the checkered flag for the 16th time this season.

With a win already on the weekend, Gafrarar would return to the Briggs & Stratton Motorplex on Sunday looking to add to that. With a third place qualifying result for Saturday’s X30 Pro Junior class, Gafrarar bettered that on Sunday qualifying second before finishing fifth in the prefinal. A push back bumper penalty post-race relegated him down to eighth on the results sheets and an outside row four starting spot for the day’s main event, but that did not faze the young talent. Moving from eighth to fifth in the opening six laps of the main event before the red flag would fly, Gafrarar moved into second two laps after the race went green again as he put pressure on the leader. Taking the top position with fifteen laps remaining, Gafrarar drove away with his second win of the weekend and 17th on the season.

It was a perfect start to Sunday’s KA100 Junior action as a pole position and prefinal win would see Caleb line up on the inside of the front row for the day’s main event. With one class victory already on the weekend, Gafrarar made it two for two in the KA100 Junior class to sweep the main event wins and score three race wins at the Briggs & Stratton Motorplex.

Gafrarar added, “What a weekend. Three wins on the weekend, and I was able to put OTK, Rolison Performance Group and Circle K on the top step of the podium multiple times. A big thanks to my mechanic Will Orsini for the continued work. Looking forward to the next one!”