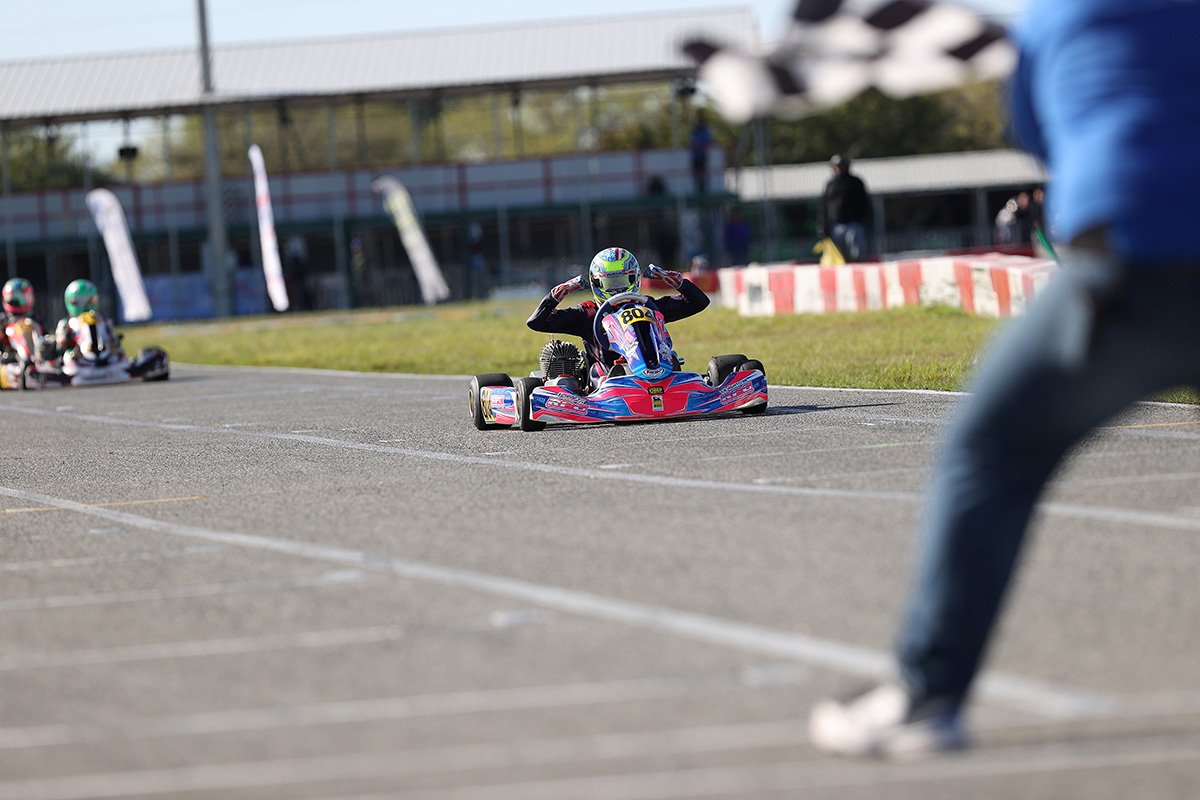 It is beginning to sound like a broken record, but it was another race win for Caleb Gafrarar at this past weekend’s ROK Cup USA Florida Winter Tour. Taking on both the ROK VLR Junior and ROK Junior classes at the challenging Orlando Kart Center, Gafrarar earned one pole position, two heat race wins, two prefinal victories and topped the podium blocks in the VLR Junior class.

“It was a great weekend, but a challenging one,” explained Gafrarar. “The weather was constantly changing, and not only did I need to be on my driving game, but the RPG program also had to be on their setup game. They nailed it nearly each and every time I hit the track. We had a few setbacks throughout the weekend but overcame them when it counted.”

In a weather filled weekend, Gafrarar was unfazed by the changing conditions as he found himself at the front of the field in both dry and wet weather competition. Scoring the VLR Junior pole position on Friday afternoon, Gafrarar was consistently at the front of the field earning the first and third heat race victories with his only blunder on a perfect weekend being a fifth place result in heat two. With a trio of solid finishes, the Rolison Performance Group driver would start from the pole position for Saturday afternoon’s prefinal where he drove to the win and earned the main event pole position. Like what he did the day prior, Gafrarar’s Sunday performance in the VLR Junior main event was total perfection as he handily drove to the win and his second VLR Junior win of the three race championship.

On the ROK Junior side of the program, Gafrarar showed pace in practice but failed to earn the pole position on Friday afternoon by the slimmest of margins. Beginning his quest to top the ROK junior podium from the outside of the front row, Gafrarar went fourth, fifth and second in his three heat races to maintain his second place starting position for the prefinal. Showing his determination to sweep the Junior classes yet again, Gafrarar earned the prefinal race win and pole position for Sunday afternoon’s main event.

Back on track for the ROK Junior final, Gafrarar lost a little pace as he fell back into the clutches of his fellow competitors. Falling to second in the opening lap and third at the mid-race distance, Gafrarar lacked the pace to fight for the race win, but managed to hang on to the third position, adding his second podium result of the weekend.

Gafrarar added, “It was a strong winter season for us, and I am looking forward to the rest of the 2022 racing season. Also, it was great to see Erica Robazzi and some additional staff members from the OTK factory on site this weekend supporting their drivers.”

Caleb Gafrarar will enjoy a few weeks off before he starts a new series of competition. With race wins in every program he has competed at to date in 2022, Gafrarar will take on the Texas Sprint Race Series March 25-27 and then the Superkarts! USA (SKUSA) Pro Tour over the April 1-3 weekend, both at NOLA Motorsports Park.