As part of the VemmeKart Scholarship Program, American driver Braden Eves competed in the ROK International Final this past weekend in Lonato, Italy. Taking on the world at the famed South Garda Karting facility, Eves piloted his VemmeKart to a solid eighth place finish in the world-class event. 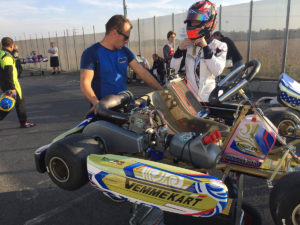 As part of the VemmeKart Sponsorship Program, VemmeKart drivers showing commitment to the brand, a desire to win and solid race results have the opportunity of being approached by the factory and are awarded invites to international events.

“Braden has shown extraordinary growth as a driver this season and he was committed to putting the VemmeKart on top in the United States,” explained Vince Mandarino, designer of the VemmeKart. “With his outright speed, commitment to helping build the brand and his accomplishments in national level competition, Braden was offered a chance to compete on the world stage with a trip to the ROK International Final courtesy of the VemmeKart factory in Italy.”

Traveling to Italy with his helmet and suit, Eves, the first American driver to ever make the senior final at the prestigious event, benefited from having a local based team with knowledge and experience to guide him through the process from start to finish. With experience at the track in the past, knowledge of the local community and language as well as great data and information on the VemmeKart, Eves’ European debut was seamless as he took advantage of all the assets and tools that were provided to him. Assembling a new chassis on his arrival and utilizing a Vortex ROK engine, an engine that he has not driven in the past, Eves continued his 2017 momentum in Europe.

Mandarino continued, “Braden was quick from the first opening lap he ran and was near the top of the time charts throughout the week. Qualifying fourth in his group, which was 11th overall, Eves went on to secure fifth, ninth, fifth and sixth place results through the heat race flight format. Advancing to the final and starting inside row six, the VemmeKart driver advanced forward another three positions to claim the checkers with an eighth place result.” 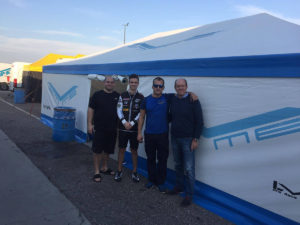 “The past twelve to eighteen months have been very successful,” explained Eves. “I would like to think that it was all my doing but honestly, the VemmeKart has made my job easy. Constantly improving the chassis with minor tweaks and upgrading to high quality components, the VemmeKart is now on a level to compete against the major karting brands and manufacturers in the world.”

Mandarino continued, “Braden has worked with us to put together the best possible 100cc chassis for the North American market. I feel we have, what could potentially be the best kart on the market. With the hard work from the VemmeKart factory as well the team here in North America, continued success is a given and we are excited to finish 2017 and move forward into 2018.”

“This is a program that has been a long time in the making and the goal to make it easier for North American drivers to compete in Europe,” added Mandarino. “While karting is more of a hobby in the United States, it is a sport in Europe and we want to make sure we have the best opportunity as possible to excel in both markets.”

VemmeKart would like to thank everyone that helped achieve these great results in 2017. For more information on VemmeKart, please contact Lorenzo Mandarino by phone at 011 39 344 2588342, by e-mail to VemmeKart@VemmeKart.it or visit them online at www.VemmeKart.it.