BN RACING SET FOR THE STREETS OF TORONTO 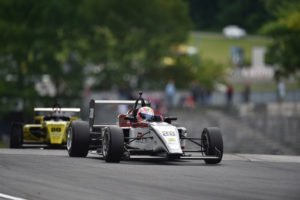 After a massively successful weekend at Road America, Chicago, Illinois based BN Racing is excited to head to the Streets of Toronto. Competing in both the Cooper Tires USF2000 Championship Powered by Mazda and the Pro Mazda Championship Presented by Cooper Tires, BN Racing will enter a pair of drivers in each Mazda Road to Indy series as they look to repeat success from the most recent event.

“Road America was a dream weekend for us,” explained Luke Varley of BN Racing. “To have drivers stand on the podium five times in one weekend was unbelievable really, but also very stressful. The whole team is happy that we were able to get the monkey off of our back and get our first victory, but it only has made us hungry for more.”

David Malukas will lead the way into Canada. After scoring two pole positions and two victories in Wisconsin, Malukas now sits fourth in the overall series championship battle and is riding a wave of momentum into a track that he has experience on from last year.

“A repeat of Road America would be awesome,” added Malukas. “But it is never easy. I really like the Toronto layout and we were very fast here last year in USF2000, but had some bad luck in both races so I’ll be looking to overcome that this year.”

While Toby Sowery joined Malukas on the podium in Road America, it was planned for him to only do that one event to test the waters for a possible 2019 racing program. Joining Malukas in Toronto will be Kris Wright. In his most recent Pro Mazda event, Wright scored a pair of top-ten results at the Grand Prix of Indy including a sixth place finish in race two on the weekend.

Keith Donegan has found his home at BN Racing and after debuting with the team at Road America and scoring his first podium result in process, the Irishman looks forward to Toronto. Joining Donegan in the Cooper Tires USF2000 Championship Powered by Mazda side of the program will be Russell McDonough. Working with driver coach Jonatan Jorge, Russell has showed huge strides of improvement in his first year in motorsports of any kind.

Varley continued, “Keith drove great at Road America and if it wasn’t for some unfortunate bad luck, I think he would have been in the top-five in both race two also. Russell continues to show improvement and closed the gap to the leaders by a huge margin in Wisconsin. While the Pro Mazda side of the program is running on all cylinders, it was great to see our USF cars where they should be.”