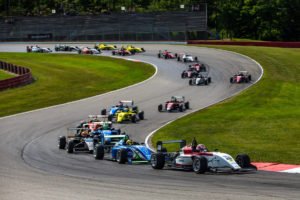 With the 2018 racing season in the closing stages, Chicago, Illinois’s BN Racing continues to impress. Scoring a double victory in the Pro Mazda Championship Presented by Cooper Tires as well as a podium result in the Cooper Tires USF2000 Championship Powered by Mazda at Road America, the team continues to build momentum and proved that a few weeks ago at the Mid-Ohio Sports Car Course.

“The Road to Indy is the most competitive ladder series that I have ever been involved in,” expressed BN Racing’s Bryn Nuttall. “Sometimes you get ahead and think that you have an advantage, only to travel to the next event to learn that another team has found an advantage. We are continually evolving both our cars, our drivers are very happy with the progress and the on track performance speaks for itself”

After scoring two wins and five podium results at Road America, a team record this season, the wave of emotions would fade at Toronto, as results did not reflect the speed of the BN Racing machines. Follow that up with an event at the Mid-Ohio Sports Car Course two weeks later, the multi-car outfit showed speed yet again in both Pro Mazda and USF2000 competition.

In Pro Mazda, David Malukas continued his impressive qualifying record in 2018, starting inside the top-three for the 12th consecutive time, including pole position and another new lap record for Sunday’s second race at Mid-Ohio. Race one on Saturday saw Malukas finish second. Focused on Sunday’s race two and poised for his third victory of the season, an engine failure took Malukas from a comfortable lead as he neared the halfway mark of the event. Kris Wright added a pair of top-ten results to the BN Racing resume.

In only his third event weekend with BN Racing, Keith Donegan had the pace for the front of a talent-filled USF2000 field. Finishing fourth in the first of three races on the weekend, Donegan also went on to set the third quickest lap of race two. Race three would end with contact as he battled for third during the majority of the race, eventually finishing fourth. Russell McDonough has grown leaps and bounds since joining BN Racing. Beginning his racing career only 13 months ago, McDonough has consistently improved, often showing top-ten speed.

With only a few events remaining on the 2018 calendar, BN Racing is looking forward to 2019 and that begins with the annual Chris Griffis Test at the Indianapolis Motor Speedway. Taking place September 22 and 23, BN Racing has openings in both Pro Mazda and USF2000 cars for drivers interested in testing with the team or working towards a complete 2019 program.

Nuttall added, “The annual test was moved forward one month and we are working hard to finish the season strong, but also look forward to next year. The Chris Griffis Test provides for a ton of track time at the world famous Indianapolis Motor Speedway.”