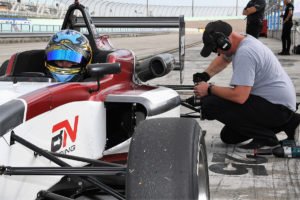 Leaving the wintery weather of Chicago, Illinois, BN Racing traveled south to the Homestead-Miami Speedway in Homestead, Florida for the final official Road to Indy Test of the 2018 season. With drivers in their Cooper Tires USF2000 Powered by Mazda machines, BN Racing would also debut their Indy Lights Presented by Cooper Tires car with veteran team driver David Malukas.

“It was a great end to our 2018 season and provides us with a lot of momentum heading into 2019,” expressed Bryn Nuttall of BN Racing. “We had an excellent year in Pro Mazda this past season, winning plenty of races and showed great pace in USF2000 as well. For the test, we really wanted to focus on our new effort in Indy Lights, as well as show the speed of our USF2000 program for 2019.”

David Malukas would make instant headlines in his first official Indy Lights test with BN Racing, as he closed two of three sessions at the top of the charts and ended day one fastest overall. The rain clouds appeared mid-morning on day two, and they delivered, ending the event early.

“It is an amazing way to end the year. I struggled at the Chris Griffis test in Indy Lights and didn’t expect to be this fast here,” stated Malukas. “These results again prove what this team can do and fills me with even more confidence heading into 2019.”

Nuttall continued, “We’ve been nonstop since Portland putting all this together for the Lights program and to debut like this is pretty special. We came here hoping to get within half a second, even that would have been some achievement for a new team, so to be fastest on day one and our used tire runs being equally impressive is very pleasing.”

In USF2000, Kyle Dupell wheeled one of the BN Racing entries, joined by Anthony Famularo for day one, who was making his first appearance in the Road to Indy after being out of the car for four months since an injury sustained in Italian F4. Quick out of the gate, Dupell led all drivers in the first session and topped the charts. Famularo made good progress throughout the day acclimatizing himself with a new team, car and circuit.

Braden Eves entered the BN Racing program on Tuesday and though it was a rain-shortened day, impressed in his first laps in a BN Racing prepared USF-17. Circuiting faster in his first session than he did the day prior, Eves finished the last session of the event third quickest.

Nuttall continued, “I was happy with all three USF2000 drivers. Kyle was quick and led the first session on Monday morning. Braden jumped in the car Tuesday, and was very impressive despite his new tire run being compromised and missing the last session, confirmed how good our USF2000 cars are. We have now headed official sessions in all three categories of the Road to Indy in 2018; that’s pretty unique and a great way to close out the year.”

With a few more seats to confirm for 2019, BN Racing has openings for both the Cooper Tires USF2000 Championship and the Pro Mazda Championship Presented by Cooper Tires for qualified drivers looking to run the entire season.