Traveling north of the border for the Honda Indy Toronto, Chicago, Illinois based BN Racing took part in only their third Cooper Tires USF2000 Championship Powered by Mazda event. Showing speed at Road America with their first ever pole position, the momentum continued in Toronto with two top-five qualifying efforts and race pace that saw them in the top-three during wheel-to-wheel competition.

“Toronto was a good weekend for us as it was our first real street course,” explained Bryn Nuttall of BN Racing. “We have been able to show our speed on two different types of circuits and prove that we can compete with the biggest and most experienced teams in the USF2000 program. We are really looking forward to Mid-Ohio after some more huge gains in performance and car setup.” 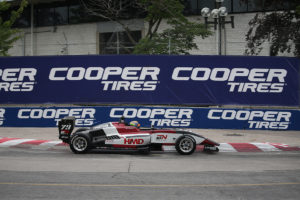 Taking to the streets of Toronto, BN Racing driver David Malukas proved that his Road America pole position was no fluke. Qualifying in the fourth position for race one, Malukas jumped two positions in race two qualifying claiming an outside front row starting position.

In a stout field of teams and drivers, BN Racing and Malukas, in their one car effort, were looking to stand on the podium in Canada but luck would not be on their side. After a poor start, Malukas overtook the championship points leader to lead laps early in race one before a part failure forced him to retire from the event. Race two saw the same speed from the Chicago based resident as he was once again near the pointy end of the field before an on track incident while passing for the lead would eliminate him from competition. On both instances, the BN Racing prepared machine of Malukas was the fastest on track before retiring.

Nuttall continued, “It looked as if we would be on the podium but in racing, you have to get to the checkered flag. David continues to impress me as well as his peers in the paddock and I am confident a race win is on the horizon.”

The horizon may not be that far away for the young driver as in less than one week’s time, he will be back on track at the famed Mid-Ohio Sports Car Course. Taking to the 13-turn, 2.258 mile circuit, BN Racing will look to shake the bad luck and have the chance to visit victory lane.