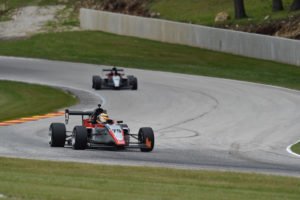 Scoring their first career Mazda Road to Indy victory, Chicago, Illinois based BN Racing had a weekend to remember at Road America. With four drivers across two of the MRTI divisions, BN Racing scored not only their first career victory, but also their second as David Malukas had a dominating weekend in the Pro Mazda Presented by Cooper Tires Championship. BN Racing led the charge on both days of competition as UK pilot Toby Sowery made it a 1 – 2 finish chasing Malukas to the checkered flag in both races.

“What a weekend!” expressed Bryn Nuttall of BN Racing. “Even though we are still a new team, this has been a long time coming and to do it this fashion is incredible. Credit has to go to the entire team, we’ve had some difficult races recently, but to bounce back like this in both categories truly shows what we can do. David was exceptional and finally got the win he deserved.”

Leading the way was David Malukas, after securing double pole positions including a new lap record and the only sub two-minute lap in Pro Mazda, the Chicago resident managed to secure both round six and seven victories at Road America, sweeping the weekend. Toby Sowery was also on a mission and put his BN Racing prepared Pro Mazda on the second step of the podium in both races, completing the Pro Mazda domination.

“When I saw the white flag I was so happy, but I think I made every mistake on that last lap! When I made it to the checkered flag, it was such a good feeling,” explained Malukas. “It was a tough race but it was a great race for BN Racing. I realized it was my teammate behind me, in his first Pro Mazda race, and that was a bit of a relief. I had enough of a gap that I could judge how far back he was on each lap. But having him back there and trying to maintain that gap really helped me keep my focus.” 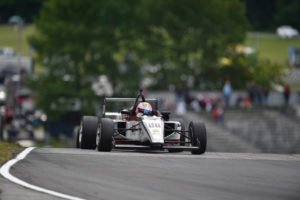 “I was a bit nervous at the start, but I watched David and went when he did,” added Sowery. “Harrison left a bit of a gap and I went through, then got around Rinus. It was a good race: some of the credit has to go to BN Racing and some goes to Tatuus, as I’ve driven this chassis a lot, in different variations – though this is definitely the fastest. David’s obviously been here a lot and we were matching his pace. But this was really only the second time I’ve really pushed the car so it couldn’t get much better than this – except to be in David’s position!”

In the Cooper Tires USF2000 Championship Powered by Mazda, Irishman Keith Donegan, making his debut with the team, drove to an impressive third place result in Saturday’s race one. Making headway throughout the 15-lap race, both he and fellow BN Racing USF2000 driver Russell McDonough advanced forward, with the latter’s drive earning him the ‘Tilton Hard Charger Award’.

“I had a really good start in race one,” explained Donegan. “From there I just picked off drivers one by one, keeping my head down and doing qualifying laps. The move on Rasmus was good – he went one way and I went another a few times and it worked out. I’m delighted, Road America is amazing, it’s very traditional and it rewards drivers. To be on the podium in my first race with BN Racing is amazing and full credit to them for giving me a car that I can show my potential.”

BN Racing will enjoy a few weeks off before heading north of the border to Canada to the Streets of Toronto on July 13-15.