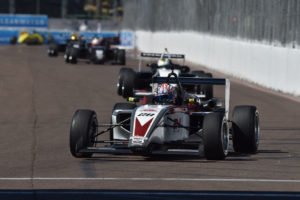 Entering select events in the 2017 Mazda Road to Indy, BN Racing made their 2018 debut with a four-car lineup. With David Malukas and Kris Wright leading the way in the Pro Mazda Championship Presented by Cooper Tires, Jamie Caroline and Russell McDonough would fly the BN colors in the Cooper Tires USF2000 Championship Powered by Mazda. Taking on the temporary street circuit in downtown St. Petersburg, Florida, David Malukas would provide BN Racing with their first podium of the season.

“The busy test season is behind us and we now have the first race under our belt,” explained Bryn Nuttall of BN Racing. “I think our four drivers did well for their first event of the season. It is always tough racing within a barrier lined circuit as a first race event and it if wasn’t for some unfortunate incidents, I believe we could have closed the weekend with even better results.”

With the race debut of the new Pro Mazda PM18 car and a series test the weekend prior at Barber Motorsports Park, where David Malukas ended up being the fastest, Malukas was up to speed quickly and found himself at the sharp end in free practice. A different qualifying strategy saw him finish seventh in Race 1, however he bounced back superbly in Race 2, finishing second, pushing race winner Rinus Veekay the whole race and finishing less than a second behind at the checkered flag. Kris Wright would have no luck in St. Pete and ended his weekend with a 12th place finish the first wheel-to-wheel action of the weekend and a 14th place result in Race 2.

Nuttall continued, “The Pro Mazda class this year is as tough as it gets, with a new car and a strong field of drivers from all around the world. A good result like David’s podium early in the season is something that’s essential for the whole team, we’re now looking to build on that and I’m sure there’s more to come from David.” 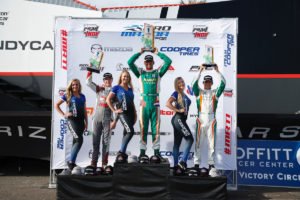 On the USF2000 side of the program both Jamie Caroline and Russell McDonough had some issues in Race 1 and failed to finish, with the crowd pleasing Caroline running a strong second in his first ever outing on a street circuit, showing why he’s the current British F4 champion with some breathtaking driving. Caroline rebounded in Sunday’s Race 2 with a strong fourth place effort. While running third most of the race Caroline was caught out in the late safety car period, costing him a debut podium. McDonough would be caught up in another on track incident and was eventually be classified in the 25th position.

In other BN Racing driver news, Jamie Caroline was recently announced as a member of the BRDC Superstars program for 2018 along with six other GT and single-seater champions. The much sought after program includes workshops and training events to enhance media and marketing skills as well as support on physical and mental fitness of drivers.

BN Racing will now shift their focus to the upcoming Pro Mazda Presented by Cooper Tires round three and four at the challenging Barber Motorsports Park.