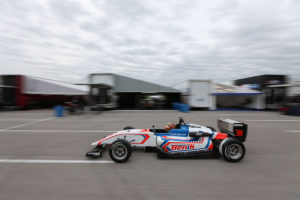 With the 2018 Cooper Tires USF2000 Championship Powered by Mazda kicking off in March, BENIK confirms two drivers for the Chris Griffis Memorial Test, taking place next weekend, October 21-22nd, at Indianapolis Motor Speedway (IMS). The drivers set to test for the team are Jaden Conwright and Rasmus Lindh, as each will take part in the eight on-track sessions over the two-day period.

“We are really looking forward to the test in IMS,” comments Nick Mitchell. “After competing in a select number of events in the 2017 season, the test will be the start of our full time 2018 campaign. We feel both drivers have huge potential and we are confident, given our pace early on in the 2017 season at IMS. Our aim for 2018 will be to field a three-car assault in USF2000, so the test in Indiana is just the start of things to come.”

Jaden Conwright comes into the test with experience under his belt. He competed in the Italian F4 Championship in 2016, and was a part of the Carlin Driver Development Program during the 2017 season. With most of his racing taking place overseas this season, Conwright is looking forward to returning home to the US and competing at IMS.

“I cannot express enough gratitude to Dan Mitchell and everyone at BENIK for the opportunity to test during the upcoming seventh annual Chris Griffis Memorial Test at Indianapolis Motor Speedway,” says Jaden Conwright. “I am eager to put all the knowledge and experience that I gained from participating in the 2016 Italian F4 Championship and the 2017 Carlin Driver Development Program to full use during the two days at Indy. The opportunity to test at Indianapolis Motor Speedway for my return to the United States is just unbelievable! The thought of driving on the same track that has hosted the Indy 500 for 106 years, and which has so much history, leaves me awestruck. The 21st and 22nd of October cannot come soon enough; I’m ready to return to my home country and fight at the sharp end of the field!”

Ramus Lindh will make the trek from Sweden to race for his first time on the IMS course. In 2017, Lindh has had great success on the karting circuit in Europe, making a notable top-five finish in the World Championships earlier this month. Lindh has only made his debut in a car recently but will test with the BENIK squad next week before traveling to Indy. With a few days behind the wheel of a car and his natural skills and success developed in karting, Rasmus is destined for success.

“I am really looking forward to testing in the Chris Griffis Memorial Test in the USF2000 car next weekend,” says Lindh. “I made my first ever outing in a car this past week, and I am already excited to get back in it again. The Memorial Test will be my second time in the car, and I think it will be a great learning experience for me.”

For more information on BENIK, please contact Nick Mitchell or Ben Cruttenden via e-mail to Info@Benik-Kart.com or by phone at 754.206.4870.