Announcing last week that they would return to competition, M1 GT Racing travelled west to the ultra-fast Utah Motorsports Campus to compete in the Pirelli World Challenge SprintX program. With Jason Bell and James Dayson behind the wheel of the Audi Sport customer racing Audi R8, the duo would compete in the Am/Am GTS division and claim a pair of third place results in their first event as teammates.

“All in all it was a great weekend in Utah for the entire team,” explained M1 GT Racing’s Technical Director Remi Lanteigne. “Both Jason and James drove well and stayed out of trouble. They jumped into the Audi R8 and worked extremely well together making the transition to the duo seamless. It was awesome to see them and the team work so well together from the very first session until the end of the weekend. This was their first event driving together and our first event in a while but we gelled quickly and were able to work through our program. As the weekend progressed, we found more speed out of both the car and the drivers and are at a good starting point heading to the next event.” 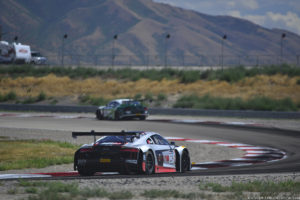 After qualifying ninth overall and third in class, Bell and Dayson would compete in the first race of the weekend on Saturday afternoon. With multiple classes on track, the M1 GT Racing duo held their own and managed to score a third place podium result in the Amateur/Amateur SprintX GTS class, an accomplishment in itself in only their first weekend of competition together.

Sunday would prove to be much of the same for the driving duo as another third place result was attained, but better lap times and more consistent race laps were an improvement as the weekend came to a close.

Lanteigne continued, “We did not do a single test lap before Utah with Jason or James so it was a lot of trial by fire this weekend. We worked extremely well as a team and I think we all came away with a better understanding of what the other needs and are already looking forward to the next event.”

James Dayson explained, “It was a very positive weekend getting back in the 2016 chassis. It was awesome welcoming Jason Bell as my teammate. We had some good chemistry and I’m looking forward to continuing that at the season finale in Austin. As for the races, we definitely had the pace for better results but unfortunately the BOP really hurt us and we struggled with grip on the track. Overall it was an awesome weekend, looking forward to the next one.”

Jason Bell went on to add, “It was a great weekend in the Audi R8. For it being my first time in the car, I felt we progressed very quickly and the race on Sunday went great. We had a 16 lap battle within our class and managed to stand on the podium. Can’t wait to get to COTA.” 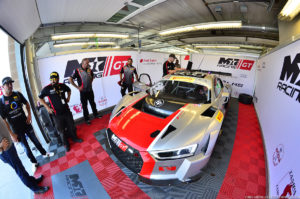 While M1 GT Racing has supporters for their racing endeavors, both James Dayson and Jason Bell bring personal marketing partners to the program. Supporting Bell at all three of his planned events include Continental Benefits, GridSport and M1 GT Racing while Dayson will fly the flag of Kilauea Investments, Elite Performance and Music Heals.

M1 GT Racing would also like to thank all of their 2017 partners and supporters. A special thank you to Audi Sport customer racing, Tampa Bay Jaw Surgery, Surgery Centers of America and Spyder Active Sports Wear as well as High Park Brewery ( www.highparkbrewery.com ), and Vigurus Technologies ( www.Vigurus.com ), who provide team comfort and safety both in the car and crew environment.