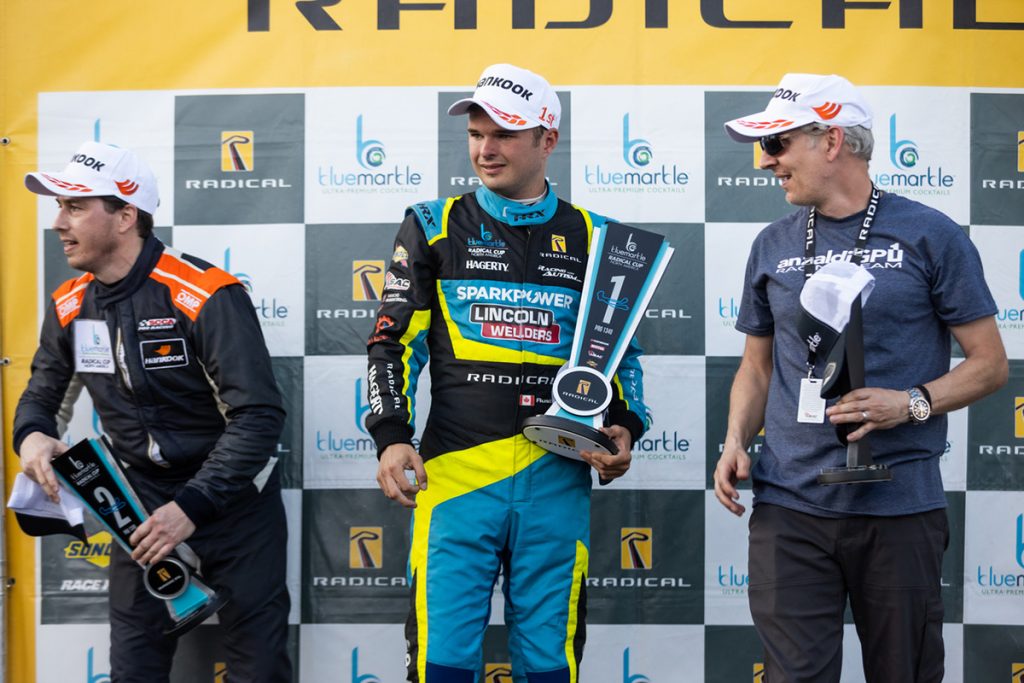 It was off to Alabama and the Barber Motorsports Park for Austin Riley and his Racing With Autism program as they competed in the Blue Marble Radical Cup North America event this past weekend. Overcoming adversity in the first wheel-to-wheel action of the weekend, Riley was able to climb to the top step of the podium in race three as he earned his first career Blue Marble Radical Cup North America victory. 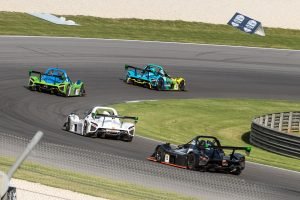 “Practice went well today, and qualifying is tomorrow,” explained Austin Riley. “I am looking forward to tomorrow and making a run at the pole.”

Returning to the track on Friday, Riley had looked to qualify on the pole position in class but had his flying lap removed due to a red flag scenario as the flag flew before he completed his lap. Lining up for the first of three races that weekend shortly after qualifying had ended, Austin was able to have a great start and advanced forward through the first corner. Entering turn two, the young Canadian was hit hard from behind causing severe damage to the left rear of his Radical machine. Forced to retire from the race, Riley would shift his focus to the second wheel-to-wheel action on the weekend.

With the crew working late into the evening to repair his car for race two, Austin Riley rewarded them with a masterful drive forward. Advancing forward like a seasoned veteran, Riley started dead last and 33rd on the grid and when the smoke and dust had cleared forty minutes later, Austin had pushed his car forward to finish fifteenth overall and narrowly missed his class podium crossing the line in fourth.

With threatening skies and the chance of rain for the start of race three, Austin Riley headed to the grid for the final time this past weekend. Getting the race started before the rain entered the area, the initial start was a little ragged, but Austin managed to take advantage of the scenario and move into second in class. Closing on the leader, the mandatory pit stop played a vital role in the outcome. Unfamiliar with pitstops and lacking experience, the team instructed Austin to follow the leader and if he pitted, Austin was to do so as well. Entering perfect and hitting his marks, when he was released from his pit spot, he was held up by another car coming in for repairs allowing the leader to clear this car and make it back on track without being delayed.  Riley would lose more than seven seconds in this exchange.  Riley rejoined the track in fourth as all his hard work to move forward was dashed.

Austin then made a valiant effort to move forward. Lapping as the fastest car in class, a second quicker than the leader, Riley was able to get back to the bumper of the front-runner just before a late race caution bunched the field back up again. Losing a few positions on the restart but making them back up before the final lap, Austin was pressuring the leader as he looked for a way by. With the leader making a poor decision on a slower car, Riley was able to score his first career Radical North America victory. 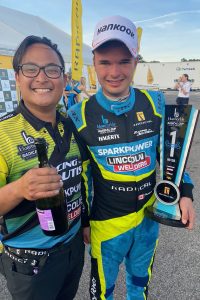 At, the podium, Austin was lucky enough to have the “hometown” crowd on his side during the podium presentation.

“What a weekend,” added Riley. “It was so great to have all of Ady’s Army here to cheer me on along with all of their supporters.   I met so many great kids, and I think they inspired me to drive like that.   From sitting on the sidelines in race one to winning in race three, the weekend was full of ups and downs but in the end, I am all smiles as I head back home and look to prepare for the next race.”

Racing With Autism and Austin Riley would like to thank their partners and supporters. A huge thank you to Spark Power Corp., Lincoln Electric, Hagerty, Ady’s Army, The Hawthorne Foundation, Hammond Manufacturing, Cal Chip Connected, Forest Contractors, Utech Electronics, ATC Coral as well as all family, friends, and supporters.