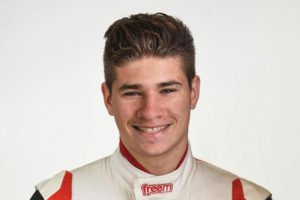 With the weekend coming into view, Velocity Racing Development (VRD) is excited to be welcoming Antonio Serravalle to the team for the F3 Americas Powered by Honda event at Road America. Serravalle will be joining the VRD outfit alongside Mathias Soler-Obel and Parker Locke.

“We are welcoming Antonio to the team with open arms,” explained Dan Mitchell. “I have had the opportunity to work with him in the past and he has talent and speed, and I am hoping that we can bring that out of him at Road America.”

The 16-year-old from Unionville, Ontario, Canada is currently competing in his second season in Indy Pro 2000 Presented by Cooper Tires Championship as part of the Road to Indy ladder program, but is taking this weekend to try his hand in F3 Americas. So far this season, Serravalle has accomplished a career-best fourth place finish on the Streets of Toronto, but is aiming for the podium in his F3 series debut.

“I am extremely grateful to the entire Velocity Racing Development team for this opportunity,” Serravalle stated. “I am only in my second season racing cars, and I think it will be extremely beneficial to be able to hone my skills in multiple series while being able to learn from the different teams I get to work with. I have also been testing some GT3 cars for a manufacturer for the past month. It has been very rewarding to learn different cars, their attitudes and the way that they handle on the track. Also, I am meeting a ton of new people which is also great.”

Serravalle has come up in racing through karting and has achieved multiple karting championships over the years. Last year, Serravalle made the jump from karts to cars, straight into the second rung of the Road To Indy ladder program. Over the course of his two seasons, Serravalle has had the opportunity to hone his skills. Earlier this year in June, Serravalle competed at Road America in Indy Pro 2000, where he was able to pull off a top-ten finish. Now, he is hoping his recent experience will help his success in F3 Americas.

“VRD is a great team, and I think that I will be able to learn a lot from them,” Serravalle continued. “I am feeling confident having already competed at Road America this season and am eager to get to work with the team. Additionally, I would like to welcome Sabelt America to our program as a Marketing Partner, and I am looking forward to working with them and their growing brand.”