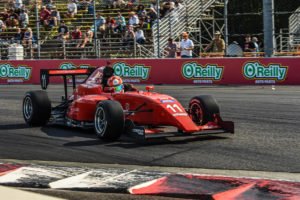 From his home near Toronto, Ontario, Canada to the second to last event in the Indy Pro 2000 Championship Presented by Cooper Tires, Antonio Serravalle matched his season best finish this past weekend at the Portland International Raceway. Classified fourth when the results were made official on Saturday, Serravalle claimed a pair of top-seven results with his seventh place finish on Sunday as he teamed with the potent RP Motorsports squad for the first time in 2019.

Qualifying sixth for Saturday’s wheel-to-wheel action, Serravalle avoided the turn one melee with no damage but with a major consequence. Avoiding a crash, the young Canadian was deemed to have reentered the track illegally and would be penalized post event. Pushing his #11 with each passing lap, Serravalle utilized the knowledge and engineering of his new RP Motorsports team to battle for a podium finish.

Crossing the stripe in P3, the infraction and a ten second post-race penalty relegated him back to fourth and denied the youngster of his first career Indy Pro 2000 Championship podium as he matched his best result of the season.

“Definitely disappointing for sure, but our pace is much better than it has been in the past and this weekend is something that we can build on. Regarding the first corner, I saw six or seven cars going every different direction, and I felt that the safest thing for me to do at the time was exiting straight over the curbing. I did not want to put my equipment or my competition in danger and acted in safety, not to gain positions. To find out post-race that I was penalized and have a podium taken away is not what I would have hoped based on the situation,” expressed Serravalle. “On the other hand, it was great to work alongside a teammate such as Kyle Kirkwood. He has at least four years more experience than me so his knowledge on car setup, changes and track conditions helped greatly.”

Returning to the track on Sunday, Serravalle lined up inside row four for the start of the second race of the weekend. In an anti-climactic event that followed the penultimate round of the NTT IndyCar Series, the field remained close in competition, but little passing could be had.

Serravalle added, “Sunday was a little bit of a follow the leader type of race. We were unable to move forward, but also maintained our on-track position. Congrats to Kyle Kirkwood on another race win, and I am really looking forward to racing alongside him again at Laguna Seca. It is a track that I have dreamed about racing at since I was back in karting.”

Antonio Serravalle and Pserra Racing would like to thank Tycoon Capital Limited, Scuderia Ferrari Club of Toronto, Cos Shore Inc. -Medi- Scan, Ferrari & Associates, Sabelt America and Camptech II Circuits for all of their support in the past, present and future.