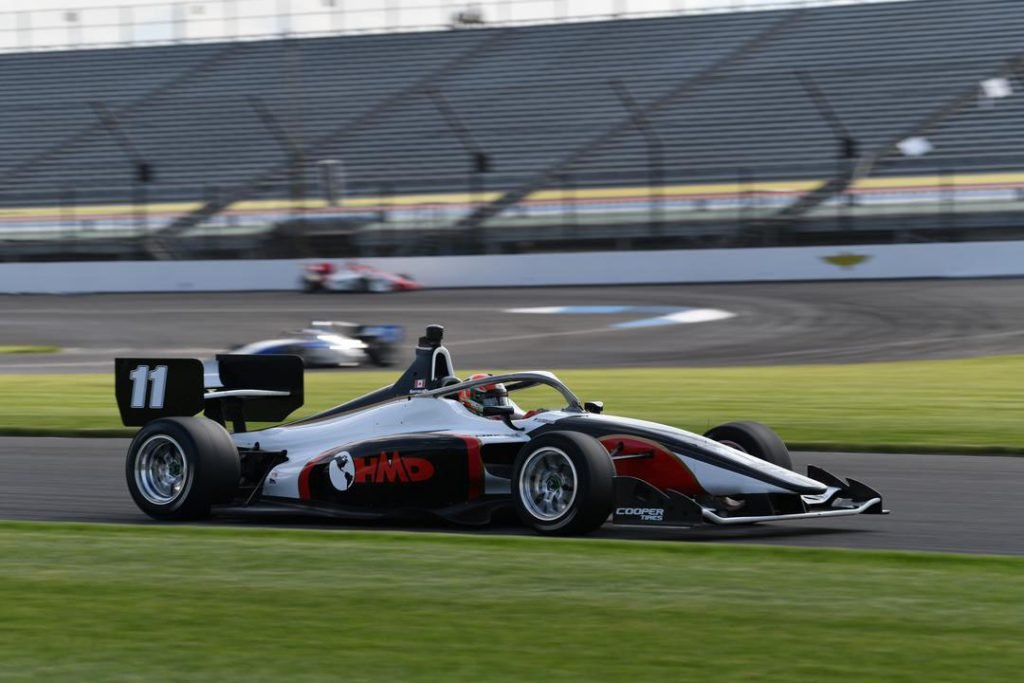 Making the switch to HMD Motorsports with Dale Coyne Racing, Antonio Serravalle completed one test day prior to entering rounds three and four of the Indy Lights Presented by Cooper Tires program. With a career best finish of sixth last season, the young Canadian matched that result in his first race with his new team as he looks forward to future success with the Indianapolis based program.

“It was a great first weekend despite the weather and results in race two,” explained Antonio Serravalle. “HMD proved that they are one of the top teams in the series and the elevation of my speed showed that in back-to-back events. They have race winners in their program and drivers that I can also learn from so that is a positive as well.”

Starting the weekend out with a single practice session on Friday morning, it was straight into qualifying on Friday afternoon for the first wheel-to-wheel race that would take place later that day. The qualifying session would be important since the fastest lap would set the grid for race one and the second fastest lap would determine the lineup for race two. Progressing through the session and utilizing two new sets of Cooper Tires, the Canadian pushed his #11 machine to an eighth place starting spot for both weekend races.

Another quick turnaround would see Serravalle in his first race with the team that afternoon as he rolled off the grid from the outside of row four. An excellent start saw a position gain in the first complex of corners as Serravalle settled into the seventh position. Taking advantage of some overanxious driving in front of him and showing great pace, Serravalle found himself in the fourth position just past the halfway mark as he and a trio of HMD Motorsports drivers occupied three of the top five positions. Falling off a little towards the end of the race, Serravalle earned his best result of the season and matched his career best when the checkered flag flew with a sixth place effort.

Returning to the track Saturday, a disjointed day would ensue. Rolling off the grid from eighth once again, Serravalle ran inside the top-seven when the race went yellow for incoming weather and eventually red flagged for lightning close by. With rain threatening, series officials moved the remainder of the race to after the NTT INDYCAR SERIES event in which constant rain continued to fall. Restarting the scheduled 1:15pm event close to 7:00pm, the complete grid would start the race on a wet setup. Struggling slightly with grip, Serravalle had a spin in turn fourteen and fell to the tail of the grid after running eighth. Never giving up and gaining experience along the way, Antonio drove forward to cross the line 11th.

Serravalle added, “It was good experience in the rain, and I learned a ton. I have a great engineer and an awesome coach and owe a lot to them for their constant efforts. I can’t wait until the next one.”

With a few weeks’ hiatus, Antonio Serravalle will return to Road America for a team test on May 26th prior to the next event on Detroit’s Belle Isle in early June.