ANTONIO SERRAVALLE KICKS OFF SEASON AT THE GRAND PRIX OF ST. PETERSBURG 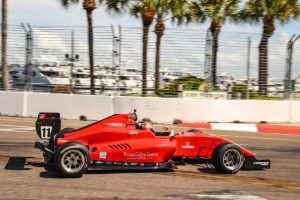 From his home, north of the border in snowy Canada, to the sun-kissed streets of St. Petersburg, Florida, Pserra Racing’s Antonio Serravalle kicked off his 2019 racing season this past weekend. Taking on the Indy Pro 2000 Championship Presented by Cooper Tires Series, part of the famed Road to Indy program, Serravalle closed the weekend with a pair of top-ten qualifying efforts as well as a seventh place result in race one on Friday afternoon.

Thursday saw Serravalle hit the track for two important sessions. The first on-track running would be the one and only practice session early in the afternoon before qualifying took place later that day. With a ninth place effort in practice, the Pserra Racing pilot held station in qualifying to qualify on the inside of row five.

“It was a good effort for us but I think there is more in both the car and myself,” expressed Serravalle. “The Streets of St. Petersburg are pretty daunting as one small mistake or brush of the wall could take you out of the session or decrease the limited running time that we have.”

Friday was the home of race one on the weekend and Serravalle jumped forward from his ninth place qualifying effort to finish seventh. With consistent race laps and keeping his car safe, the young Canadian garnered experience and knowledge all while claiming valuable points towards the end of the year championship battle.

Saturday began with another qualifying effort as Serravalle placed his Tycoon Capital Limited sponsored entry on the outside of row five and looked to move forward in race two later that afternoon. A decent start and positions gained in the opening few laps were all for not, as Serravalle eventually would be forced to the pits after issues hindered any further progress.

“I am happy with the weekend, but not satisfied,” added Serravalle. “I want to win and will keep pushing to do so. It was a good weekend to build experience, but I am really looking forward to my next event in May. A big thank you to my Engineer Daniel Mitchell, Jay Howard’s Driver Development program as well as all my teammates this weekend.”

With almost two months off, Antonio Serravalle’s next on-track competition will be May 9-11 at the famed Indianapolis Motor Speedway.