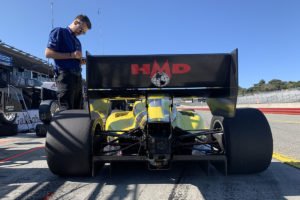 Competing in the Indy Pro 2000 Championship Presented by Cooper Tires as an independent for the past two seasons, Canadian driver Antonio Serravalle is set to make his Indy Lights debut. Taking on the Sebring International Raceway with HMD Motorsports next week, the multi-time karting champion will take to the track for the two-day Series Test on December 11 and 12.

“It’s pretty exciting to have this opportunity and with a quality team such as HMD Motorsports,” explained Serravalle. “They were arguably the turnaround team of 2019 and made a huge impression during the latter stages of the season. They have hired a pair of high-quality engineers, and I am confident they will help me get up to speed. This will be my maiden voyage in an Indy Lights car so I will be looking to get up to speed as quickly as possible on Wednesday of next week and then push the limits more on Thursday.”

Serravalle continued, “We have been running as a father and son team for the past two years. We have had very little support from bigger teams but managed to do decent, as well as gain experience at a lower cost. I just turned seventeen, and I’ve got a lot of racing experience and young age, and this is what IndyCar and Formula One teams are looking for today. Heading into 2020, the goal is to make the jump to a professional program and work with experienced engineers.” 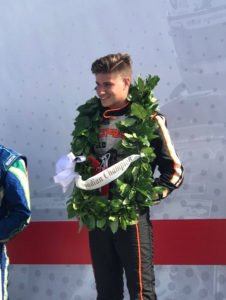 Beginning his motorsports career at the age of three, Serravalle turned his first laps in a kart just two years after he started walking and entered his first wheel-to-wheel event at the age of five. The Canadian progressed through the karting ranks and was chosen to be a member of the CRG Factory Race Team. Competing overseas, Serravalle secured several pole positions and podiums in the highest level of elite racing in the world in the WSK Karting program where current Formula One standouts such as Charles Leclerc, Max Verstappen, and Lando Norris also competed. Stateside, Serravalle was a Florida Winter Tour Vice Champion, Vice Champion at the Superkarts! USA (SKUSA) SuperNationals, Eastern Canadian Karting Champion and multi-time Canadian Karting Champion. In the gearbox categories, Serravalle also claimed the United States KZ Championship and the Canadian Karting Championships KZ title in 2017 and is a former Margutti Cup Champion in Italy.

“We will see how the test goes, break for the holidays and as a family, discuss the plans for 2020,” added Serravalle. “My primary goal is to win and give my partners the recognition they deserve, and if that is in Indy Lights, I will work as hard as possible to be on the grid come St. Pete.”

Antonio Serravalle and Pserra Racing would like to thank Tycoon Capital Limited, Scuderia Ferrari Club of Toronto, Cos Shore Inc. -Medi- Scan, Ferrari & Associates, Sabelt America and Camptech II Circuits for all of their support in the past, present and future.