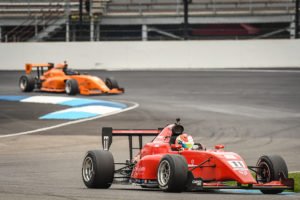 With rounds three and four of the Indy Pro 2000 Championship Presented by Cooper Tires descending on the Indianapolis Motor Speedway, Canadian Antonio Serravalle made the trek south to compete in the kickoff to the ‘Month of May’ festivities this past weekend. Taking on the Indianapolis Grand Prix in the Road to Indy program, Serravalle added a pair of top-ten results and currently sits tenth in the series championship points battle.

With rain in the forecast on Thursday, Serravalle took advantage of the first two practice sessions to test rain setups, gain experience and improve on wet weather skills around the fast and flowing Indianapolis circuit. Claiming the tenth quickest time in session one, Serravalle improved in the second of three sessions to score the eighth quickest time and held station in session three to close the day.

Friday would bring cooler temperatures and a pair of qualifying sessions before round three of the 2019 championship that afternoon. With no rain in site for the remainder of the weekend, the Pserra Racing operation went to work claiming inside row six starting positions for both weekend races.

“Our qualifying pace does not seem to be as good as our long distance pace, so I am hoping that we will be able to turn a pair of 11th place starting spots into some solid results,” explained Serravalle. “We have had some bad luck to start the 2019 season, so I will be looking to turn it around here in Indy.”

Race one yielded a positive result as an 11th place starting position turned into a ninth place finish. Round four was a carbon copy for the Canadian drivers as he once again gained two positions over the complete race distance to finish ninth again, his third top-ten finish of the season.

Serravalle added, “We currently sit tenth in the points after four rounds and head to Lucas Oil Raceway in less than two weeks’ time for our first of two oval races in 2019. Last year I was able to secure an eighth place result in my rookie oval race and will be looking to improve on that.”

Taking part on the Friday evening of Carb Day for the famed Indianapolis 500, Pserra Racing and Antonio Serravalle will have their goals set high for the ‘Carb Night Classic’.