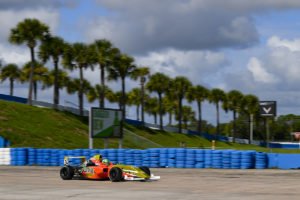 In the second to last event of the 2019 F4 United States Championship Powered by Honda season, Alliance Racing Sponsored by Gas Monkey Energy would head south to the bumpy and challenging Sebring International Raceway. Entering the event with four competitors, the Indianapolis based team walked away from the event with one podium result and six top-ten finishes.

“It was a solid weekend for the team and a big morale booster as we head into a six-week break,” explained Toney Edwards. “Our last event weekend was challenging with wrecks and mechanical issues, but the guys worked very hard the past few weeks, and tested, to prepare for this weekend. Their hard work and efforts were rewarded with a podium from Dylan and six top-ten results by the team.”

Leading the way for Alliance Racing was Tavella who claimed eighth, third and eight place results over the three-race weekend. Finishing in the points during each and every wheel-to-wheel on track session, Tavella started his weekend with a ninth place effort in qualifying. Not to be outdone, fellow Gas Monkey Energy teammate Chandler Horton also showed speed in Sebring. After qualifying in the 11thposition, Horton finished seventh, sixth and tenth. 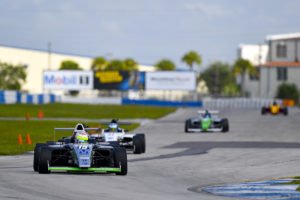 With her first visit to the Sebring International Raceway, Zoey Edenholm improved greatly throughout the event weekend. Disappointed with her qualifying result of 22nd, the female driver from Arizona moved forward in race one to finish 15th. On a damp but drying track for race two, a late race spin took her out of contention for another top-fifteen result. Race three was her best race of the weekend as she battled hard to move forward to 11th. Fighting hard for a top-ten and points scoring position, a small error sent her off track and down the running order to eventually finish in 18th.

Will Edwards closed the gap to the leaders again at Sebring and improve during every on-track session. After qualifying 24th and finishing 22nd and 20th in the first two races on Saturday, Sunday saw Edwards advance forward yet again and finish in the 19th position.

Edwards continued, “With a successful weekend, we can now focus on our final event of the season and aim for the top step of the podium. We have one more event in 2019 and it is the biggest one of the year. Ad 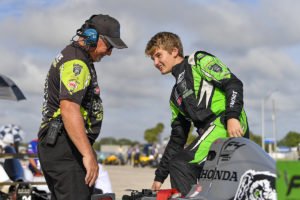 ditionally, we will have a new driver joining us at COTA and will have an announcement about him and his marketing partners in the very near future.”