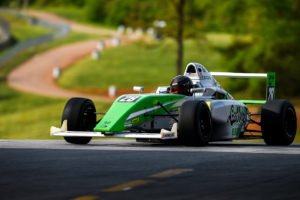 Traveling to Road Atlanta for the opening round of the F4 United States Championship Powered by Honda, Alliance Racing Sponsored by Gas Monkey Energy entered five drivers. With sophomores looking at their shot at overall series championship and rookies making their debut in the program, the Indianapolis based team claimed four top-tens, three top-fives and one podium result in a dramatic weather filled weekend.

“The only thing more that I could have asked for was a race win,” explained Team Owner Toney Edwards. “At the end of three official races, we proved that we have made big strides from last year, claimed our first ever podium and left the track with almost zero damage.”

Second-year drivers Dylan Tavella and Chandler Horton led the way for the team. Tavella garnered the strongest results for the five driver squad with a fourth place finish in round one and leveled up to a second place podium result for round two. Taking his first F4 United States Championship Powered by Honda podium, it was also the first for Alliance Racing. Round three would prove to be a difficult one for the New York resident as a late race spin relegated from a possible third top-five result to a 23rd place finish.

Chandler Horton claimed the 12th position in race one but vastly improved his results in race two with an impressive fifth place finish en route to the third fastest lap of the race. Courtesy of his pace, Horton started inside row two for race three and passed for the lead, but unfortunately misjudged the amount of distance needed to slow down and make the corner, washing out wide and allowing several drivers to pass by. When the final checkered flag had flown, Horton ended race three just outside the top-ten in 11th.

“It was a difficult weekend for the crew and I commend and congratulate them for all of their hard work,” added Alliance Racing Engineer Nathan Toney. “With qualifying canceled and the constantly changing weather, we had to be on top of our game and they deserve as much credit as the drivers do.”

Canadian Ryan MacDermid and female Zoey Edenholm would make their F4 United States Championship Powered by Honda series debut at Road Atlanta and crossed several items off their experience list. From taking their first standing starts to their first time at Road Atlanta, both drivers completed each and every race lap, ended the weekend with no damage and secured valuable experience that will help them in the remainder of 2019.

MacDermid started his 2019 campaign off with a point scoring performance in round one claiming the tenth position after starting P15. Also a positive on the weekend for the young Canadian was his pace. In race one he secured the fifth fastest lap, thus slotting him into the fifth starting position for race two. Finishing the weekend with 11th and 12th place results in races two and three, MacDermid is already focused on the next event in eight weeks’ time. 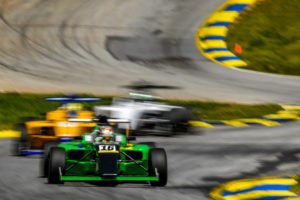 Confirming her participation only one week before the season opener, Edenholm turned laps during only one day of testing before heading to Road Atlanta for her series debut. Decreasing the gap to the leader in each and every session, Zoey kept her Gas Monkey branded #24 car out of trouble securing three top-20 finishes and gained experience in both wet and dry weather competition.

Will Edwards continued his progression both on and off the track as the youngster from Indiana progressed throughout the weekend. Claiming the 24th fastest lap in practice, Edwards finished 22nd, 21st, and 20th in his three wheel-to-wheel races and just like his fellow four Alliance Racing Sponsored by Gas Monkey Energy drivers, rolled his car back to the paddock after each on-track session.

Toney added, “Both Zoey and Will are on very steep learning curves. Zoey is new to car racing and new to the series so everything is fresh for her in 2019. Will is a second year driver, but the first year was more of a fun year with no pressure. Now with an engineer such as myself and a driver coach on staff, we are able to compare Will’s data with other drivers in the program to provide a visual learning tool for him when he is not in the seat.”

With the next event on the calendar set for June 21-23 at the Pittsburgh International Race Complex, Alliance Racing Sponsored by Gas Monkey will get back into their test program to fine tune their already quick race cars. With a seat open for test and race opportunities, interested parties are asked to contact Alliance Racing.