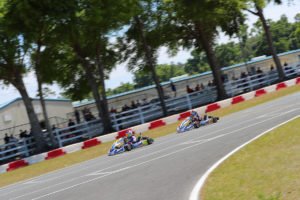 Always pushing for success and improvement, Speed Concepts Racing and their Tony Kart branded drivers obtained both this past weekend at the final round of the ROK Cup USA Florida Winter Tour. After multiple heat race wins and a pole position, the elite karting program ended their weekend with one podium, four top-ten results and another championship to their name as the winter karting season concluded for the 2019 season.

With a chance at the series championship, Luca Mars began his quest for his second title in as many months with a fourth place qualifying effort in the ROK Junior division. Remaining consistent throughout the heats and starting third for Saturday afternoon’s prefinal, a difficult run saw him cross the stripe in the eleventh position, and a little added pressure heading into championship Sunday. Lining up inside row six, Mars did what he needed to do as he drove forward to a fifth place finish and garnered enough points for his second championship of 2019.

“A huge congratulations to Luca Mars on his second championship of the year,” explained Mike Speed. “He is one of, if not the, top junior drivers in the country and is proving that with his speed, consistency, drive and results. I know he will continue to push forward as the year goes on, and we can’t wait to see where this young talent can progress to.”

Despite falling just short in the championship battle, Canadian Justin Arseneau was the class of the ROK Junior field in Ocala. Taking the pole position in qualifying and sweeping the three heat races, Arseneau also secured the prefinal victory. Lining up on the inside of the front row for the main event, the Speed Concepts Racing driver delivered a podium winning drive as he claimed the third position at the end of the main event.

With four other drivers in the ROK Junior category, the quartet brought mixed results throughout the three-day event weekend. Paul Bocuse impressed in qualifying for his first national event as a junior driver piloting his Tony Kart to a fifth place result in qualifying. Scoring both top-five and DNF finishes as he came accustomed to the aggressiveness of the junior drivers, Bocuse ended his weekend in 15th.

“Paul was pretty impressive in his Florida Winter Tour junior debut,” expressed Speed Concepts Racing Driver Coach Alex Speed. “His data was one of the best all weekend, and we were constantly comparing some our junior veterans to him. He has a pretty bright future and will win a lot of races in a full size kart.” 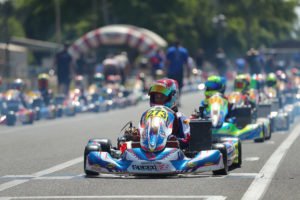 Kyffin Simpson progressively improved from his 12th place qualifying to start sixth in Saturday’s prefinal but a difficult run saw him end that on track session in 32nd. Claiming the Hard Charger award in Championship Sunday’s main event, Simpson improved twenty-two positions as he rocketed his way forward to finish tenth.

Luke Lange and Noah Baker had up and down results throughout the final round of the Florida Winter Tour. Baker would gain additional experience throughout the weekend as he battled in the middle of the talent filled ROK Junior field while Lange showed great pace that rivaled drivers in the top-ten, and heat race results to match, but eventually finished his weekend in a disappointing 35th with a DNF.

The biggest Speed Concepts Racing improvement from a driver came from Vortex Mini ROK driver Ayden Ingratta. Consistently moving further up the grid with each passing weekend, Ingratta turned his 14th place qualifying effort into tenth, 11th and 14th place finishes in the heat races. After finishing 12th in Saturday afternoon’s prefinal, the ever-improving competitor claimed a top-ten result with an eighth place finish when the final checkered flag flew on Sunday.

Speed continued, “Thank you to all of our drivers, hard working mechanics, engine builders and families that continue to make our program successful. A big thank you to SwedeTech Racing Engines for their speed and support in our ROK program.”