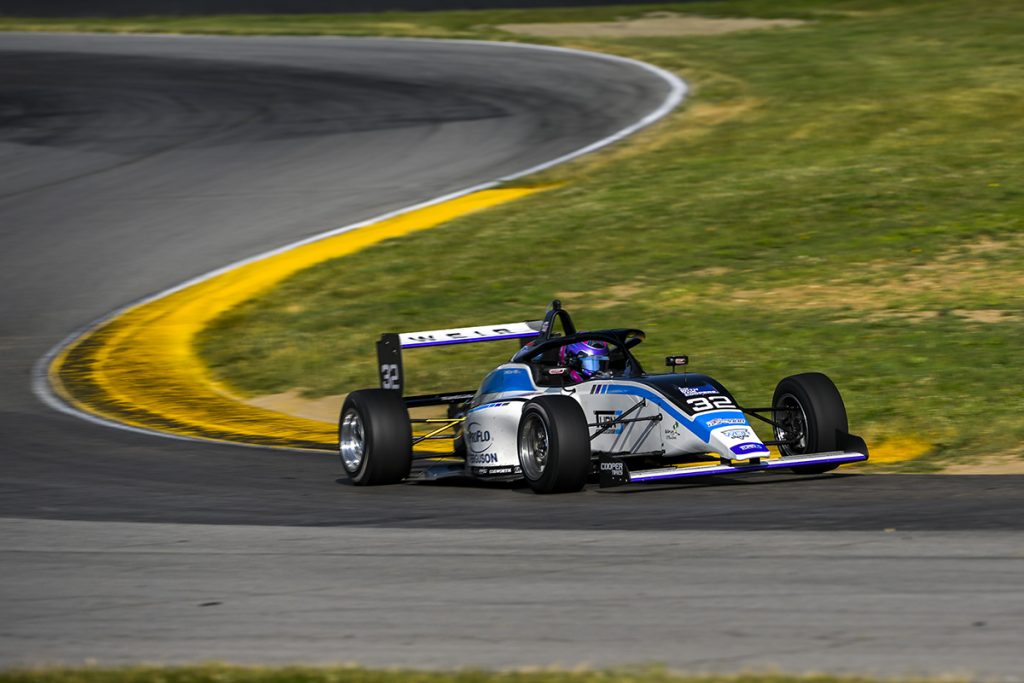 It was another Cooper Tires USF2000 event weekend and another pair of top-ten results for Christian Weir. Taking on the Mid-Ohio Sports Car Course in Lexington, Ohio, Weir would overcome adversity in race two to work his way back into the top-ten during race three after a solid sixth place result in the first wheel-to-wheel action of the weekend.

“It was great to kick the weekend off with a sixth place in race one but a punctured tire in race two really hurt our momentum for the weekend,” explained Weir. “We never gave up and the team did a great job all weekend, and we closed the event with our second top-ten finish. Now we prepare for another street circuit.”

After Thursday’s three session Promoter Test Day, Friday would be another jam-packed day with a quick practice session, qualifying and the first wheel-to-wheel action of the weekend. Pacing inside the top-ten during the pre-event testing, Weir slotted himself into P12 and would take the first green flag from the outside of row six.

Quickly moving forward over the opening lap, Weir was able to break into the top-ten before the caution flag would fly on lap two for an incident. After a short clean up, the field was back racing again and the Illinois resident was back on the charge forward. With three races over two days, Weir was cautiously aggressive as he was precise and determined in his moves. Advancing forward to cross the line in the sixth position, it was another solid result for the Turn 3 Motorsport driver.

The second race of the weekend would not be a kind one for Weir as contact on the first lap caused a punctured tire as he was forced to pit. Back on track to continue running, Weir utilized the track time to gain experience and knowledge for the third and final race of the weekend Saturday afternoon and in doing so, set the fastest lap of the race.

Rolling off the grid in P9 for the third and final race of the weekend on Saturday afternoon, Weir would look to keep his #32 machine inside the top-ten and finish the weekend with some momentum. Running lap times comparable to drivers in the top-five, the Illinois resident was able to come home with another top-ten result on the weekend and some valuable points towards the USF2000 championship chase.

Next up for Christian Weir will be a trip to Canada and the Honda Indy Toronto. Taking on the barrier lined street circuit, Weir will look back on his St. Pete experiences to fight for the podium north of the border.

Christian Weir would like to thank all his 2022 partners for their continued support. A big shoutout to Ferguson, ProFlow, eComfort and Motorcars of Palm Beach. A huge thank you to both Turn 3 Motorsport for all the help and support.