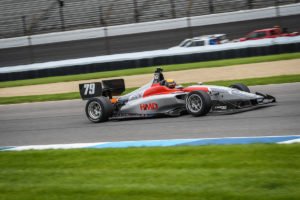 Scoring several top-fives and one podium result to date so far in 2019, HMD Trucking backed BN Racing driver David Malukas added a pair of sixth place results this past weekend at the Indianapolis Motor Speedway road course. Battling a stout field of Indy Lights Presented by Cooper Tires Series drivers, Malukas salvaged a decent finished and slotted himself into the sixth position in the series championship points battle.

Showing great pace through Thursday’s test sessions, Malukas topped the charts in session two and was second quickest in test session three after skipping the wet weather first session that morning. With plenty of speed to battle at the front of the field, Friday would be the home for the first qualifying and wheel-to-wheel action of the weekend.

As rain moved out of the area, cold weather moved in as drivers needed to take every advantage of tire temperature and grip to lay down a flying lap in qualifying. As one of the first sessions on track in the morning, Malukas qualified his Bryn Nuttall engineered machine to an inside row three starting spot for his first career Indy Lights start at the famed Indianapolis Motor Speedway.

Advancing forward at the drop of the green flag, Malukas quickly found himself inside the top-five battling with some of the best up-and-coming motorsports talents in North America. Utilizing push to pass to keep pace with his competitors, Malukas ended his day in sixth, a disappointing finish based on Thursday test times.

“The team and I have a lot of work to do this evening to find the speed that we had, but now we are missing,” explained Malukas. “It is a disappointing result, but we never give up and will work hard to see what tomorrow brings.”

Back to the track Saturday, the Indy Lights drivers were the first competitors on track for their second qualifying session of the weekend. Setting the grid for the afternoon round that was just prior to the NTT IndyCar Series event, Malukas improved on his qualifying effort from the day before, claiming the fourth quickest lap time and outside row two starting position.

Once again, the battle in the top-five ensued and David Malukas was in the middle of it. Working hard to maintain or improve his position, the Chicago, Illinois resident claimed the third fastest race lap en route to his second sixth place result of the weekend.

Shifting gears, David Malukas will travel to Kentucky Speedway for his first oval experience in an Indy Lights machine. Testing in preparation for the Freedom 100 at the Indianapolis Motor Speedway, Malukas will then return to Indy for another test on Monday, May 20th, qualifying on Thursday, May 23rd and the Freedom 100 on Friday, May 24th. Follow all the racing action on IndyLights.com or the Road To Indy TV app for your smart phone.