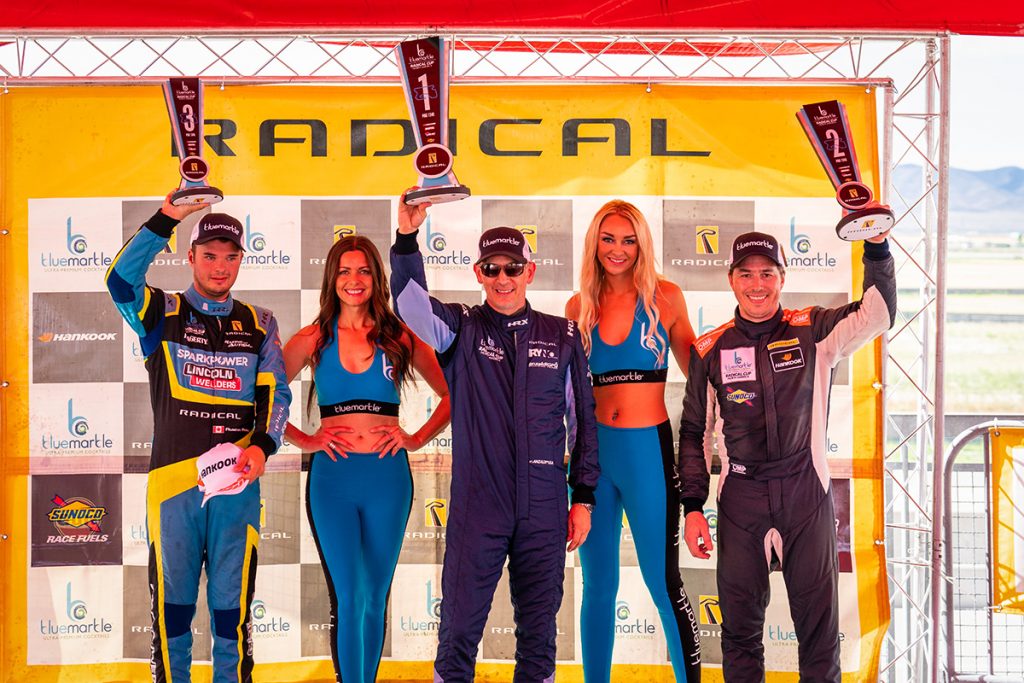 Sunday, August 14th – With two races in the books yesterday, Blue Marble Radical Cup North America teams and drivers returned to the Utah Motorsports Campus (UMC) Sunday for race three of the weekend. As some drivers looked to continue their winning ways, others would look to rebound and find their way to the podium in the final wheel-to-wheel action of the weekend. 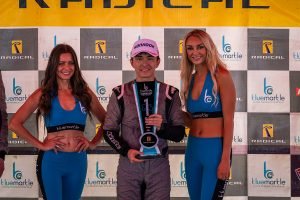 Race #3
Race three on the weekend saw Jon Field earn the pole position in the Platinum class based on the fastest race lap in race two as Robert Rossi and Steve Jenks would roll off the grid second and third respectively. Palmer Miller continued his presence at the front of the Pro 1500 field with the pole position ahead of Kent Myers and Jack Yang while Pro 1340-point leader Austin Riley outpaced Reid Stewart and Mike Anzaldi to take the pole position in that class.

Robert Rossi would get the jump from the outside of the front row and snatch the lead from Field at the exit of the first corner with Jenks slotting into third. Miller led the 1500 class maintaining his position at the front of the field as Riley did the same in 1340. Riley would lose the class lead to Anzaldi on lap two as the two drivers entered the braking zone of turn four. The driver to watch over the opening three laps was Scott Wagner as he began his charge through the field. Looking to get by Jim Booth, the duo went wheel-to-wheel through the final complex of corners but was unable to get by. Slowing their pace with the intense battle brought Judd Miller into the mix making it a three-horse race for the fourth position. Meanwhile, Rossi had opened a gap of 4.034 by the end of lap four. Booth, Wagner, and Miller would go three wide in the final corner with Wagner going through the dirt on the exit of the corner. Miller would get a good run and get by Wagner and made a bid to jump Booth in the next corner but outbroke himself giving the spot back to Booth. A few cornered later, Miller would complete the pass and set his sights on Jenks and the final step of the podium.

Miller continued to lead 1500 while Jack Yang was by Reid Stewart for the second position. Turning consistent laps and running faster than Miller in front, Yang and Stewart would settle in line to try and run down the leader. Anzaldi and Riley would run lock step as the pair ran similar lap times lap-after-lap as the evenly matched drivers ran first and second on track and in the championship 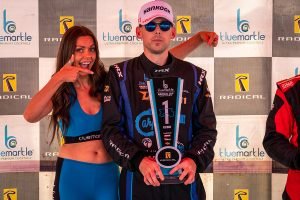 Disaster would strike for Jenks with twenty minutes remaining as his car came to a stop on track promoting Judd Miller to a potential podium result. With the caution out, the field was neutralized and would line up behind the safety car delaying the mandatory pit stop window. Back to green flag racing with fourteen minutes to go, the race was on for the win. Fifty percent of competitors would make their mandatory pit stop on the first time as Field went opposite strategy from the leader Rossi upfront. While the leaders in Pro 1500 and 1340 stayed on track. A lap later, Anzaldi, Yang, Riley, Stewart, and others pitted with Anzaldi exiting the pits with the 1340 lead as Stewart was able to jump Riley as well to take over the second position. Jack Yang used a fast lap, a pit stop, and a little luck to jump Palmer Miller to take the lead in the 1500 class as Miller slotted into second ahead of Kent Myers.

Jon Field runs three fast laps before pitting but is unable to get back on track ahead of Rossi. Rossi retakes the lead and only a lap later, the yellow flag would fly again for Wagner who had stopped on track. A short caution would yield to a green and white flag to resume the race with a one-lap sprint as Field would push Rossi down the front straight into turn one. A brake lockup cost Field some time as Rossi streaked away with a ten-car length lead. Rossie would take the win ahead of Field and Judd Miller in the Platinum class. Jack Yang would win the Pro 1500 class and finish fifth overall as Palmer Miller and Kent Myers would join him on the podium in second and third.  However, After the podium Yang was found to have speed through pitlane and was issued a post-race penalty, relegating him to fourth, and promoting Palmer Miller to the win, Kent Myers to second and Dan Decker to third. 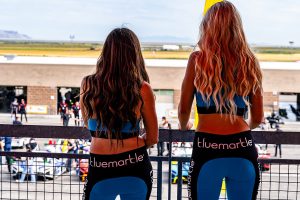 Mike Anzaldi would strengthen his championship position with the win as well as the Sunoco Hard Charger Award ahead of Reid Stewart and Austin Riley.

With the final checkered flag of the weekend, teams and competitors will now shift their focus to the next stop of the Blue Marble Radical Cup North America program at the famed Circuit of the Americas (COTA) over the September 16 – 18th weekend in Austin, Texas.