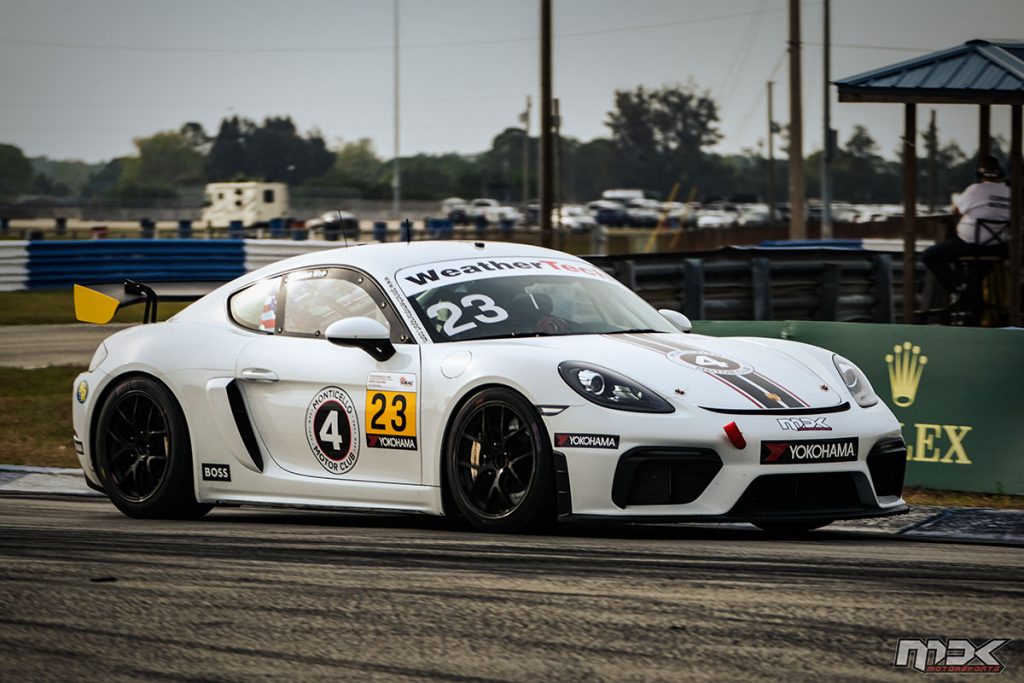 Doubling up on his Cooper Tires USF2000 Championship effort, Illinois resident Christian Weir made his MDK and Porsche Sprint Challenge debut this weekend at the Sebring International Raceway. As the youngest driver at the event, Weir turned many heads in the sports car world earning his first podium result of the season in his first event.

“That was a fun weekend. I really did know what to expect in my first weekend in a GT car,” explained Weir. “I only got a few hours of testing before the first race which left me a little anxious to see how it would all unfold. MDK has been amazing since the day we met, delivering on everything they have been promising. I was blown away by how professional and welcoming this group of people is.  We had some supply issues to get my original car ready and with Team Owner Mark Kvamme being well liked and received in the paddock, he was able to pull some strings and get me on the grid.”

With a shipping and supply issue at no fault of MDK or Porsche, Kvamme was able to pull some strings with his contacts in the industry to get a Cayman GT4 car for Weir to drive. Borrowing a loaner from Ari Straus from Monticello Motor Club, Weir was on track and ready for the weekend despite less than a day and a half of testing before his first wheel-to-wheel race.

In the first of two practice sessions, Christian was able to get accustomed to the car and turned the seventh fastest lap of the session. With a damp, yet drying track in session two, Weir was able to be patient on the grid as cars hit the track. Making it out later in the session and getting up to speed, Weir set the quickest time overall early in his run only to be outdone in the final minutes and fall to third. With motivation high, it was on to qualifying.

Having never experienced a Porsche Sprint Challenge qualifying session and not knowing what to expect, the Naperville, Illinois native was fifth quick and would line up on the inside of row three for the first of two races over the weekend.

Weir explained, “In free practice one, I just wanted to settle in before pushing harder in the second session, but the weather came in and meant I couldn’t push too much. Qualifying was more of a practice session as we worked on some of the things my Coach Richard Lyons and I had analyzed from practice.”

The first wheel-to-wheel racing of the weekend would be an early one on Saturday as cars were stationed at the pre grid at 7:30am and rolling on to the track at 7:50am. Barely time to have a morning coffee before strapping into the Porsche Cayman GT4, Weir made a fantastic start and was immediately in the position to fight for a podium result. On the final restart, Weir got jumped off the line and lost one position to close his first race in the fifth position.

With one race under his belt and confidence much higher, Weir would roll off the grid in the sixth position with lap times from race one setting the starting grid. Just as he was in the morning, Weir was right in the mix picking off drivers in front of him with calculated and veteran like passes. Just past the halfway mark, Christian moved clear into the third position as he put down fast and consistent race laps. With the leaders further up the road, Weir settled into a rhythm and slowly began to catch the pair in front of him but was unable to challenge for the win before the checkered flag flew.

Weir added, “During race two we decided to push a little more, and I immediately felt more comfortable with the car. Tyler, my engineer, and Kyle, my mechanic, were constantly making fine adjustments to get the car more to my liking. It was a bullet; I was able to outpace the guys ahead and jump to P3 by the halfway point. Richard got on the radio at this point to get me to bring it home as we had already exceeded the weekend goals. These Porsche GT4s on Yokohama tires are mega fun. I’ve enjoyed the Porsche Sprint Challenge weekend so much and can’t wait for the next one in my Porsche Cayman GT4 MR.”

“The faith and investment that we have put into Christian, and that he is putting into his craft, are certainly paying off,” says team CEO Megan Kvamme. “The symbolism of our first podium coming from such a young driver isn’t lost on me. As we all grow together, we’re looking for many more podiums for the MDK Motorsports family.”

With their team debut. MDK Motorsports sets the new standard in the paddock. Operating a professional program that rivals the top teams in INDYCAR and IMSA, MDK Motorsports provides the venue to entertain partners, but also the tools to win!

Christian Weir would like to thank all his 2022 partners for their continued support. A huge shoutout to Ferguson, ProFlow, eComfort and Motorcars of Palm Beach. A huge thank you to MDK Motorsports and the Porsche Sprint Challenge for welcoming Christian with open arms and the support to succeed.