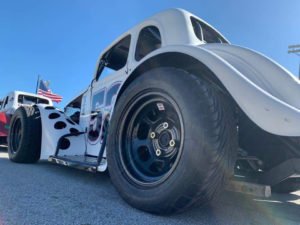 Two years ago this month in 2017, 12-year-old Jak Crawford won the United States Legend Car INEX (USLCI) Young Lions Road Course World Finals at the beautiful, roller-coaster-like track at Atlanta Motorsports Park. After successes in both karting and Legends cars, it was Crawford’s first time he could combine the road course skills he had honed since he was six years old with the awkwardly-handling, slippery Legends car machine, and it was an instant success.

The following year in 2018, Crawford stepped back from Legends Car events and when he did show up, he won. Instead, the Texan focused on karting in Europe and transitioning to formula car racing. The F4 Mexican race accompanying the F1 race in Mexico City in 2018 kept Jak from defending his road course world championship in Las Vegas as the then 13-year-old began the first steps of his open wheel racing career.

This year, Jak’s calendar is free, and he is on his way back to Atlanta but this time in the Professional division as he will race the best in the world from Europe and elsewhere on the full two-mile track. The event takes place November 1-3 and since Crawford hadn’t been in a Legends Car since March, he decided to dust off the cobwebs and flew out to the USLCI Asphalt Nationals for oval racing in eastern North Carolina this past weekend.

Crawford is not really an oval racing expert, not having enough events over the years, but he is naturally fast in anything that he drives. In order to keep learning more on ovals, Crawford moved up to the Professional division at the beginning of 2019. At the Asphalt Nationals this week, by the end of the first day of practice with a field of 37 cars, Jak was fastest in the last practice run.

“Mark Nahrstedt Race Cars always does an amazing job with the cars, and the car was ready to roll at the front of the field when they arrived,” explained Crawford. “It was a good week in the car, and we were able to show speed instantly.” 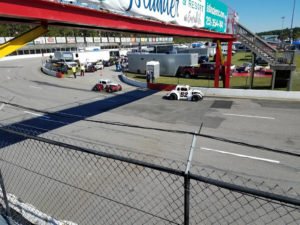 The second on track day would include a warmup session, a qualifying and a heat race. Nahrstedt would guess wrong on a gear for the morning sessions, and Jak would miss pole position by .06 seconds and slot in at third. For the heat race, the gear was changed, and Jak won handily. Combined with other heat race results, Crawford would start second for the feature race on Saturday afternoon.

Unfortunately, the outside row at the track they were racing on at Carteret County Speedway is a dead zone and all you can hope to do is slot down to the inside early. Making it more difficult on Crawford was that he did not have a spotter, and so he would have to navigate the positioning to the inside with his left side mirror and instantly he fell from second to seventh on the first start.

The race was full of attrition and yellow flags ruled the day as there were half a dozen or more yellow flags over the 35 lap event. Starting on the outside row over and over again, Crawford fell all the way to the 15th position at one point. With a dozen laps to go with Crawford re-starting in P12, he finally got some momentum and drove the car up to fifth. The car was amazingly fast and Jak would hold fast lap of the race, but a fast car is not always a winning car and some bad luck and typically poor USLCI officiating would end his day.

All day long the officials ran double file restarts. With five laps to go and with Jak in fifth they decide to run their first single file restart of the day. Had it been double file, Jak would have slotted into third most likely. Instead, the second, third and fourth place cars in front of him decided to push each other hard on the single file restart with Jak a car or more length in arrears. The fourth-place driver pushed the third-place car so hard, he spun himself.

Unable to take evasive action, Jak may have brushed into the side of the spinning cars left rear tire as the car was already sideways. The officials short on vision and long on incompetence gave the penalty to Jak who possibly never even touched the spinning car. After Crawford would not concede to the penalty that surely cost him a possible win or podium finish, a black flag was shown to him. 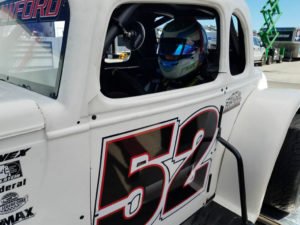 “It is my last USLCI oval race,” stated Crawford. “It’s not the drivers who are over-aggressive constantly, it is the officials who can’t figure out how to control the drivers, run a clean race and not make bad calls. One of the 35 lap races today took nearly an hour and a half because of all the yellows. It’s really bad.”

“We never expected to compete for the win here because we hadn’t been here practicing like the others. We were just there to get some time in the car, but you spend a lot of money and time to get all the way over to the outer-banks of North Carolina, you are at the front of the field, and then you get disrespected by the off-track people who are getting paid to be there. We are definitely owed an apology by the series. The driver behind me said he saw the whole thing, and I never spun the car. He spun himself. I was too far away.”

Jak Crawford would like to thank Mark Nahrstedt Race Cars, OMP Racing Gear, and Bell Helmets for their help and support this weekend and onwards into the future. For more information on Jak Crawford please follow him on Facebook: @jetpakjakcrawford and on Instagram: jakcrawford52. Jak’s marketing website is jetpakjak.com.